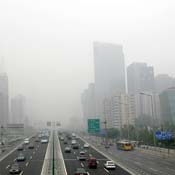 Ozone is the worst pollutant there is because it creates smog. I have three words for people who advocate reducing or even eliminating pollution control standards in America: look at Beijing (pictured). Take a nice deep breath and a good look at China because this is what the U.S. could look like if Republicans and their corporate donors have their way.

Then there’s the medical and scientific evidence. (Not that Republicans would ever let science stand in the way of their ideology!) The more polluted the air is, the harder it is to breathe since ozone affects lung tissue. Poor air quality can make it difficult for even healthy people to breathe, but especially for those suffering from allergies, asthma, and bronchitis. Ozone pollution inhibits the release of oxygen into the bloodstream, increasing the risk for heart attack and stroke in people with heart problems. As Dr. Albert Rizzo, a pulmonary specialist and American Lung Association national board chairman, explained: "Ozone is basically putting your lungs on display for suntanning. It burns the airways the same way sun burns your skin."

This is why the EPA’s science advisors recommended implementation of tighter pollution control standards which the agency estimated would save up to $100 billion in healthcare costs. And since the federal government already foots the bill for the majority of healthcare costs in America, cleaner air brings a multitude of benefits. Not to mention a healthier workforce which increases worker productivity while reducing costs for employers!

Less than an hour after the release of the August employment report Friday, President Obama acquiesced to Republican and corporate demands by telling EPA Administrator Lisa Jackson to withdraw the clean air initiative. In his statement, President Obama even used his opponents own rhetoric, saying the decision underscored “the importance of reducing regulatory burdens and regulatory uncertainty, particularly as our economy continues to recover.”

The variation of the President’s most often repeated phrase, “let me be clear” (that his “commitment to protecting public health and the environment is unwavering”), while backing away from strengthening protections against greenhouse gases is puzzling. We have yet to see whether this will be politically expedient or simply an unanswered gift to his opponents.

President Johnson signed the Clean Air Act on December 17, 1963 at 9:30 AM EST at the White House. Uranus (revolutionary change) was conjoining transformative Pluto in Virgo, the sign representing health and employment. As part of the earth element, Virgo describes the environment’s effect on health and how health affects employment.

Virgo is ruled by Mercury the planet that rules the lungs. Saturn in Libra exactly squared the Clean Air Act’s natal Mercury in Capricorn last week, reflecting the Administration’s change of decision to withdraw implementing tighter environmental controls due to pressures from moneyed interests. Saturn represents delays and timetables. Current regulations under the Clean Air Act are scheduled to be up for review in 2013.

Uranus and Pluto conjoining in Virgo during the 1960s initiated the birth of a cycle of greater environmental awareness and work to clean up the environment. Now with Uranus in Aries and Pluto in Capricorn, these two planets are in the “crisis in action” phase of their cycle. During 2012 and 2013 these two planets will impact the Act’s natal Mars in Capricorn and Jupiter in Mars-ruled Aries. Uranus and Pluto will exactly square each other on November 1, 2013 as they transit the Act’s natal Mars and Jupiter. The combination of new technological innovations and adverse events could galvanize action to implement tighter regulatory standards.

Since all of the Republican presidential candidates are opposed to reducing environmental pollution, it means that the only way at this point for President Obama to make good on his commitment is when he reintroduces stricter standards in 2013.

please quit bashing republicans all the time, it demeans you and your blog... Obama will not being doing any implementing in 2013, as he wont be re-elected. Partisan vitriol against others doesnt help a thing in life, politics, or readers, ( here to learn what astrology on markets and economy are 'saying'....not such bias inserted gratuitously at every turn.) Please!!..on top of it being tiring, and out of place and insulting.. you honestly just have the R's wrong.......Otherwise...I very much appreciate your substantial astro knowledge.

Anon:
It appears you have yet to learn that blogs represent the opinion of the blogger. When you visit WSW, you are visiting my home on the internet where I publish whatever *I* feel like writing about at any given time. If you were looking for some kind of politically free zone, you’re visiting the wrong blog since “politics” is one of the topics listed in the description of what WSW is about.

I doubt even President Reagan would recognize what the once Grand Old Party has become. Even Mitt Romney has recently stated that the Tea Party and the Republican Party are one in the same. Given that the Tea Party is funded and controlled by corporate America, (a.k.a. Tea Party Express run by Dick Armey), there is no true sincere grass roots movement. BTW, “Obamacare” as Republicans like to call it, is based on legislation proposed when Armey was a member of Congress (R-TX) and is strikingly similar to “Romneycare” enacted by the former Mass. governor in 2006.

The 2010 midterm victory was primarily based on fear instilled in seniors related to their Medicare benefits as well as a weak economy. The 2012 election will be based on who has the best temperament to manage the nation through a potential worldwide depression. A steady hand rather than extreme conservative views will prevail. Over a year of Congressional Republican majority has been nothing but negative politics on healthcare, reproductive freedoms, and pitting the basic rights of citizens vs. corporations rather than producing any beneficial economic policies. The Tea Party cannot survive as a purely negative entity. We will see this in the coming year.
Deborah