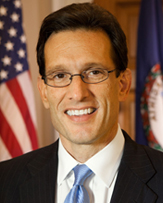 For the first time ever a Republican leader has revealed that the American myth of equal healthcare outcomes will be history if Republicans are able to repeal “Obamacare.”

While everyone knows that money plays a role in the results of most people’s health outcomes, most Americans believe that the best healthcare is available to the majority able to obtain health insurance through their employers or own their own.

Speaking before the College of American Pathologists May 3, The Hill reported that House Majority Leader Eric Cantor (R-VA) admitted that “we're not for everyone having the same outcome guaranteed." Outcomes based upon what you are able to pay either in insurance premiums, co-pays, deductibles, and cash outlays will determine the quality of care that you will receive in the GOP’s vision. Cantor clearly defines that while rationing by the government to control costs is evil, private insurance companies rationing for profits are decisions being made now. This in your face reality would be shocking to most Americans.

“Ryancare” is an example of what the Republicans have in mind for America. Senior citizens would no longer have access to equal treatment under Medicare. Instead, those seniors who can afford higher premiums under Rep. Paul Ryan’s (R-WI) private insurance company model will have better outcomes and access to the latest technology and high cost medicines. People paying lower premiums will be rationed to older technology and generic and lower cost branded medicines. No other developed nation in the world has a healthcare system that differentiates outcome by the ability to pay.

It is critical that all Americans regardless of their political beliefs understand this differentiation!

The Republican vision is to privatize all forms of healthcare with little or no government regulation to protect consumers. By Cantor admitting that we do not have an unlimited supply of healthcare, Republicans are confessing that rationing must occur in one form or another. The real message being conveyed by Cantor is that Republicans want to transfer the blood stained hands from the government to the private sector so they can claim that the government will not directly deny any care. These cowardly Republicans are the same politicians fighting any attempts by Medicare to make reasonable judgment regarding the effectiveness of medical procedures and high cost drugs while outsourcing the so-called “death panels” to private insurance companies.

Regardless of who makes the decisions, the corpses will continue to pile up in the Church of the Republican Party. When the Republicans gave their “repeal and replace” sermon before the midterm election the public took it as the gospel, mistakenly assuming they would not be the ones forced upon the sacrificial altar.