Market is Numb to Bernanke’s Hints of Change 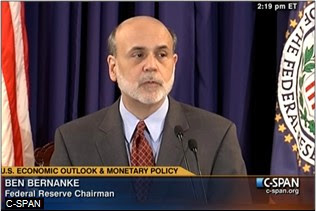 In my previous post I outlined why I thought a “subtle shift” would begin at the April 27 FOMC meeting which would slowly begin to reverse the ultra accommodative policies the Federal Reserve put into motion when the financial crisis erupted in 2008.

Fed Chairman Bernanke made it very clear at the Fed’s first ever press briefing that when QE2 ends in June the Fed will not be expanding its balance sheet any further as “the tradeoffs are not there” since “inflation and inflation expectations are higher.”

I wrote that the Fed will want to be “flexible with regard to the amount of maturing securities on its balance sheet to be reinvested.” While the Fed will maintain the size of its balance sheet for now, Chairman Bernanke confirmed the Fed’s need for flexibility when he remarked that an “early step” in the exit (tightening) process “would be to stop reinvesting all or part” of the maturing securities.

As I previously explained, the planetary influences ensured the Chairman would be asked if there was anything the Fed could do about high gas prices. Although he began to answer the question by explaining that the increase was primarily coming from increased demand from emerging market economies along with supply disruptions in the Middle East, the Moon in Pisces favorably aspecting Pluto in Capricorn provided the opportunity for Bernanke to confirm my premise. Bernanke admitted the Fed is causing oil prices to soar when he let it slip out that there’s “not much the Fed can do at least not without derailing growth entirely.” Translation: To borrow a phrase from Bernanke’s last 60 Minutes interview, the price of oil (and gold, silver, and other commodities) could fall substantially “in 15 minutes” if investors believed the Fed is beginning to turn the corner on policy.

Once again Chairman Bernanke stated that quantitative easing was effective because it created “increases in stock prices.” With his Sun in Jupiter-ruled Sagittarius opposite Jupiter (in Mercury-ruled Gemini) which harmonizes with his Mars/Neptune conjunction in Libra together with his Mercury conjoining Venus in Sagittarius,* the market knows that Bernanke wants monetary policy to be as expansive and accommodating as possible.

Bernanke’s hope is that by the time the financial and commodity market bubbles burst the economy will be strong enough to absorb the impact. Even if stock market valuations are justifiable with an improving economy, certainly bond market valuations along with gold and other commodities are unsustainable with higher interest rates.

*See this post for more about Chairman Bernanke. True to what I wrote in my previous post, Bloomberg radio this morning said Bernanke acted like he was a professor again at the podium with the reporters positioned like students at rows of tables so the room resembled a classroom. Helping Bernanke to feel at home was that the Sun harmonized with Pluto yesterday which recreates the same pattern (but in different zodiac signs) in his natal chart. Mars and Jupiter in Aries favorably aspecting his Sun/Jupiter helped ensure his first press briefing would go smoothly. Even though Bernanke has not been forthcoming on many matters concerning monetary policy, it is these planetary alignments in his natal chart that describe why Bernanke is such a big advocate for increasing transparency at the Fed.