Looking in the Mirror at the Full Moon in Libra 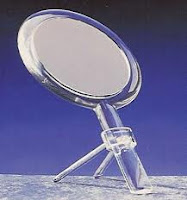 The Sun is our life force and represents who we are. The Sun’s energy is active while the Moon reflects the light of the Sun, shining like a bright spotlight in our sky when the Sun and Moon are in opposition at the Full Moon.

The April 17, 2011Full Moon occurs at 10:44 PM EDT and is the third and final Full Moon this year that occurs at the same time of the month when the Moon is perigee. (1) The Full Moon at its closest physical proximity to the Earth exerts a greater pull on the tides as well as the tides of emotion since the Moon represents our emotional instincts and needs.

The Full Moon marks the culmination point of the Moon’s monthly cycle. Just as the Moon’s light is brightest at the Full Moon, many issues that began around the time of the April 3 New Moon are “peaking” now.

Oppositions represent opposing forces which is why our interactions with others tend to be most dynamic during the period surrounding the Full Moon. The Full Moon in Libra epitomizes this energy as this sign represents relationships whereas its opposite sign Aries as the first sign of the zodiac is focused on self-identity.

Libra is ruled by Venus whose symbol resembles a hand mirror. Just as the Sun’s light is reflected onto the Moon and the Moon’s light is then reflected to Earth, our interactions and relationships with others are a mirror reflection of aspects within ourselves. Harmonious relationships and interactions with others depend on treating others the same as we desire to be treated.

Libra is symbolized by two equally balanced scales as Libra is the bridge that seeks to connect two opposing forces by focusing on what these energies have in common in order to reach agreement. Yet the Sun together with Mercury, Mars, Jupiter, and Uranus in Mars-ruled Aries now tends toward a “my way or the highway” approach which can make it much more difficult to meet in the middle. Misunderstandings can be more prevalent with Mercury retrograde, especially as Mercury conjoins impatient and headstrong Mars (exact April 19).

Mars opposite Saturn in Libra (April 18) activates the opposition of Jupiter and Saturn which reflects the huge ideological division between the two political parties which the NYT’s Richard W. Stevenson aptly describes in “The Budget Debate, Revealed” as “the most fundamental reassessment of the size and role of government – of the balance between personal responsibility and private markets on the one hand and public responsibility and social welfare on the other at least since Ronald Reagan and perhaps since F.D.R.”(2)

Venus rules all kinds of values, from the value of currencies and all types of asset values that buyers and sellers reach agreement on at any given moment, to the values of an individual or nation. As the nation experiences its Saturn return as the USA’s progressed Moon transits Libra (January 2011- August 2013), the public will have to decide whether to cut the nation’s deficit (Pluto in Capricorn) by ensuring that all Americans are taxed and treated equally under the law (Saturn in Libra) and cutting military spending and ending two wars (Aries). Or whether some segments of our society grow wealthier and more powerful than ever (again Pluto in Capricorn) by further tipping Libra’s scales of justice to laws and regulations tailored for their benefit. (Keep in mind that Libra is an action-oriented sign like Aries and Capricorn as balancing the scales does not come about by being passive.)

Venus and Libra represent our relationships with money and all types of assets. The Libra Full Moon exactly conjoins the degree Venus in Libra turned stationary direct on November 18, 2010. Major Venus-related issues that occurred then are in the spotlight now. China raised bank reserve requirements then and has done so now (to 20.5% effective April 21), warning that monetary policy tightening will continue “for some time” in an effort to prevent runaway inflation spiraling completely out of control.

At that time that The Wall Street Journal was the first to report that individuals working for “expert network firms" were being paid by employees at certain hedge funds to leak nonpublic material information that the funds traded on. I previously wrote that Venus in Pisces (March 27-April 21) could bring additional cases of insider trading out of the closet as Venus in Pisces can erode boundaries and spill into that murky gray area that exists between what is technically legal and what is not. The Full Moon conjoining the NYSE Neptune in Libra could bring more of these cases and other financial fraud to light.

Neptune can represent asset prices pumped into bubblicious territory on the euphoric belief that they will continue to climb higher as long as the Federal Reserve maintains an overly accommodative policy stance. The Full Moon squaring the Fed’s natal Neptune in Cancer reflects the majority of the public don’t believe monetary policy benefits them. In addition to inflating consumer staples, the Fed actually helps to keep the unemployment rate elevated as cheap money fosters more mergers and their subsequent layoffs.

The Full Moon squares the USA Pluto in Capricorn which resides in the sector of the USA chart representing the economy and the financial system. Pluto in Capricorn is also in this sector in the Full Moon chart set for Washington DC which indicates taking a more thorough look at what’s happening under the surface.

Earnings season did not get off to a good start last week. JPMorgan Chase (JPM) reported earnings that once again relied on removing money out of loan loss reserves to give the appearance that their earnings were better than expected as the real profit driver was the investment banking division which connects back to monetary policy.

Bank of America’s (BAC) earnings disappointment reflects compression in the interest rate margin, as the bank indicated they’re looking forward to an increase in interest rates by the Fed. The Full Moon squaring the Fed’s Neptune reflects that companies are starting to become immune and like the public even harmed as the Fed’s monetary magic begins to wear off.

With Saturn in Libra in the sector representing the government squaring Pluto (loans) in the banking sector and Venus in Pisces in the sector ruling real estate, banks could reach financial settlements with government regulators over lack of transparency in selling subprime mortgage securities to investors.

The Sun in the sector of speculation and Jupiter in Aries conjoining this sector together with multiple planets in Aries indicates that inflation is on fire. Market moves could become exaggerated in either direction at least intraday but Mars opposing Saturn at the Full Moon could narrow the gains or losses by the time the close comes around. Although Congress is in recess until May 2, the focus on raising the debt limit remains a primary focus.

The Moon rules food and liquids and Venus rules sugar which in one form or another has become the primary ingredient in almost all prepared foods. Venus rules the sector of the Full Moon chart relating to the nation’s health. Venus rules diabetes, a dis-ease which has reached epic proportions. As today’s New York Times magazine cover story (“Is Sugar Toxic?”) describes, the heavy use of sugar is being attributed by some leading cancer experts to correlate to the rapid increase of cancer. (3)

Full Moons tend to bring precipitation and the planetary influences at this perigee Full Moon can bring sudden and violent thunderstorms as Mercury and Mars oppose Saturn which can bring extremes in temperature. Venus moving from damp and foggy Pisces to Aries April 21 turns up the heat. The potential for tornadoes, earthquakes, explosions, and volcanic eruptions is greater now. Potential hot spots that could be in the news due to increased geopolitical and/or geophysical activity include:

USA Hot Spots: Hawaiian islands and West Coast, especially California (Silicon Valley, San Francisco/Sacramento areas) as the Full Moon opposes the Golden state’s natal Uranus and Pluto in Aries. Storms can create the potential for flooding in the Midwest (Minnesota down through the Louisiana/Texas border).

World Hot Spots: northeastern Canada and Greenland. Brazil and the central part of South America). Russia (St. Petersburg)/Belorus/Ukraine. Turkey, Syria, Jordan, Israel, Saudia Arabia, Yemen, Egypt, Libya, Sudan, and east African nations. Northeastern China (Uranus overhead over Beijing can bring policy surprises from the government). Mercury and Mars overhead and Saturn below through the Koreas could mean Pyongyang pulls another military maneuver to return the world’s attention on North Korea. The Sun above and the Moon below in Japan reflects the government will need to relocate thousands of people who have lost or must abandon their homes. Philippines, Indonesia, western New Guinea, and Australia.

Venus rules love, and the Full Moon in Libra can heighten our awareness that giving and receiving love is the most valuable energy of all.

(1)Previous perigee Full Moons occurred on February 18 in Leo and March 19 in Virgo.

(2)Saturn was last in Libra when Reagan was president. Uranus was last in Aries when F.D.R. was president. Like the 1930s, Uranus will square Pluto (but this time Pluto is in Cancer’s opposite sign Capricorn, the sign of government and big business). While Jupiter opposite Saturn and Saturn square Pluto over the last couple years has taken America down the path to limiting government to the extreme for the benefit of old line corporations and plutocrats, Uranus squaring Pluto indicates that individuals will become much more active and start pushing back.

(3)It’s interesting to note that the day Lustig gave his “Sugar: The Bitter Truth” lecture (5/26/2009), Mercury was retrograde in Taurus, the other sign ruled by Venus. Events that first occur when Mercury is retrograde often get a repeat look during a future Mercury retrograde cycle. Another notable connection is that Venus in Pisces now exactly conjoins where Uranus in Pisces was that day. This is a collective wakeup call that added sugars are consuming a huge portion of our healthcare costs and extracting a large toll on economic productivity.