WallStreetWeather.net Forecast For Week Of October 31, 2010: "Trick or Treat Edition" 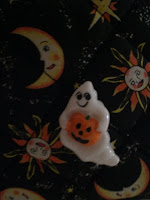 Today is Halloween, a modern twist on ancient celebrations that occur around this time of the year when the Sun (the life force) is transiting Pluto-ruled Scorpio, the sign of death and transformation. It is believed that the veil separating the living and the dead is lifted to help us come to understand the interconnectedness between the two worlds.

Of course Halloween is all about all kinds of terrifying creatures, ghosts and zombies (the living dead) roaming around. And what’s truly “unbelievably terrifying” to quote GMO’s Jeremy Grantham’s “Night of the Living Fed” is that every voting member of the FOMC has become a zombie except Thomas Hoenig.

The Fed acts like zombies because they continue to do the same thing over and over again. Fed Chairman Bernanke’s mentor is “Chief Zombie” Alan Greenspan who taught him that when one bubble bursts, another one needs to be conjured to create the “wealth effect.” In addition to promising near zero interest rates for an “extended period,” the Fed talks of the treats of QE2 and inflation targeting, so that all that debt (Scorpio/Pluto) left over from when the last bubble burst just over one Mars cycle (2 years) ago becomes cheaper to service.

The Fed wants investors to become zombies like them, under the illusion that reflating asset prices makes investors feel wealthier so they’re more likely to spend and employers are more likely to hire and grow their businesses. As PIMCO’s Bill Gross writes in his latest Investment Outlook: “The Fed, on Wednesday, however, will decide that it is better to keep the patient on life support with an adrenaline injection and a following morphine drip than to risk its demise and ultimate rebirth in another form.”

By trying to spare the economy from Pluto/Scorpio’s death and dying process that will take place one way or another over anyway, the Fed is only prolonging the pain at best and at worst runs the risk of keeping the economy in a zombie-like state for the next several years. Wall St. knows another round of quantitative easing won’t work, but they’ve become too addicted to the Fed’s drugs. That’s why the lead story in Wednesday’s Wall Street Journal hinting that QE2 could be much less than what the market was anticipating was enough to give the market pause. Imagine how the market might react if Bernanke was bluffing.

Illusions, bubbles, drugs, and addictions are part of Neptune’s domain. Neptune has appeared from Earth’s vantage point to be moving retrograde in the sky since May 31. Neptune’s energies are more pronounced November 2-11 as the planet appears to be stationary in the sky as it turns direct November 7. When Neptune’s energies are prominent, there is an opportunity to awaken from the illusion that everything is separate rather than interconnected. The market has been eagerly anticipating the results of the Midterm elections Tuesday and the FOMC meeting on Wednesday. Yet in true Neptunian fashion, the outcomes of both of these events might be somewhat confusing and raise more questions than they answer.

Consensus estimates for Friday’s October Employment report keeps the unemployment rate unchanged at 9.6% with a gain of 60,000 jobs. Although I think the report will come in slightly better than expected together with September’s figures revised to show a loss of less than 95,000 jobs, the market’s reaction is not likely to be favorable, especially in the bond market.

Excessive QE helps those on the upper end of the wealth spectrum and punishes those on the lower end. It will be interesting to see if the domestic end consumer demand gets squashed before any boost in job creation.

By the way, didn’t Ben hint to the FSC earlier that monetary policy had run its course and now it was up to fiscal policy to carry the recovery? That fell on deaf ears. It’s obvious that he is scared of becoming the scapegoat for a failed recovery. Being a public leader, it is important to project confidence and competency. When a leader cannot find direction they always revert back to old behaviors that seemed to work in the past, no matter how irrelevant they are. The announcement of QE and stimulus last year had a huge psychological impact last year. It was the feeling of being protected that relieved the frightened public and allowed them to revert back to pre-crisis behaviors, such as spending and investing. If it worked before, maybe he thinks it will work again.

So how does this trend end? There is no willpower from within to change anything, yet the world will run out of patience with the burdens of US policy. Gold as currency, of course, has supply issues. From what I’ve been hearing, the creation of a global fiat currency is the only thing that seems to fit. Fade the US Fed Reserve and the US dollar.