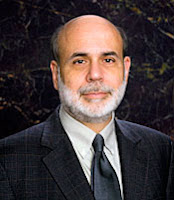 The stock market expressed its disappointment Wednesday after Federal Reserve Chairman Ben Bernanke said at his semiannual testimony before Congress that “the economic outlook remains unusually uncertain” and failed to offer any additional actions to stimulate growth and bank lending. In their fixation over not hearing what they wanted from Bernanke, the market was missing the underlying message in his statement and testimony that foretells a major change in monetary policy is slowly underway at the Fed.

Saturn the planetary energy of economic contraction, fear, and limitations had entered Libra a few hours before Bernanke’s appearance on Capitol Hill. Libra energy can be indecisive and uncertain as to which direction to go in its quest for equilibrium. Saturn in Libra currently opposing Uranus the planetary ruler of unusual and uncertain conditions indicates the Fed has to balance Libra’s scales by weighing the economy’s slow and uneven recovery together with the risks posed by additional stimulus.

Saturn rules structures, and the very foundation of the financial system could sharply break apart (Uranus) if the Fed reduced interest rates from the 0-25% range to absolute zero. Saturn squaring Pluto (debt/lending) in Saturn-ruled Capricorn reinforces the strong potential that an absolute zero interest rate could disrupt (Uranus) any economic incentive to maintain the plumbing (Pluto) that interconnects the elements of the financial system together. As I noted in the current Weekly Forecast, money market funds which buy short term commercial paper from traditional banks would not be able to function in an absolute zero interest rate environment.

Planets entering cardinal*(initiating) signs tend to bring changes in Fed policy as cardinal signs indicate a new direction has begun. The slower the planet’s orbit, the greater and more profound these changes will be as they signify a longer term trend. The Fed is particularly affected by planets transiting the beginning of cardinal signs as its natal Pluto (secrets), Sun (self-identity/the Chairman), and Midheaven (reputation) are in the beginning degrees of cardinal signs.

Pluto rules death and transformation. Since entering Capricorn in 2008, Pluto has transformed the Fed’s scope and purpose and resulted in the near death experience of its Chairman almost not getting reconfirmed. Now as Mars, Saturn, Jupiter and Uranus converge on the Fed’s natal placements while at the same time forming challenging alignments to Pluto in the sky, the Fed is facing pressure (Saturn) to act (Mars) by taking additional actions to foster economic expansion (Jupiter) while the Fed is more focused on preparing for the future direction (Uranus) of monetary policy. The period between now and early October is a time when the Fed needs to be especially careful of how it steers monetary policy, and particularly now through August as this is when these planetary alignments will occur that also affect the Fed’s chart.

Eclipses herald major changes occurring over the next several months. The July 11 Solar Eclipse conjoined the Fed’s natal Mars in Cancer (which conjoins the Fed’s Cancer Ascendant),** a signal that the Fed is taking action to implement a slow and gradual unwinding of its balance sheet in ways it hopes will avoid triggering a negative market reaction (the Cancer-ruled Moon rules the sector of the Fed chart’s representing speculation).

First Quarter Moons tend to stir action related to issues began at the New Moon. The July 18 First Quarter Moon exactly conjoined Bernanke’s natal Mars and Neptune in Libra. Even though he might not believe he has a clear enough picture of the strength of the economy, Bernanke does not see enough evidence to tip the scales in favor of using the few (but lethal) arsenal of weapons remaining in his toolkit.

As the Moon in Sagittarius (Bernanke’s Sun sign) conjoined his natal Venus (money/banking) and Mercury in Leo opposed his progressed*** Venus in Aquarius yesterday, Bernanke’s statement and response to the Senators questions were probably his most candid ever if you were carefully reading between the lines.

Saturn in Libra squaring the Fed’s Pluto in the sector of behind the scenes activity reflects the Fed is working on slowly contracting the debt it purchased (quantitative easing). Bernanke states in his testimony: “Currently, repayments of principal from agency debt and MBS are not being reinvested, allowing the holdings of those securities to run off as the repayments are received.”

To quote Bernanke, the Fed’s “already quite stimulative” monetary policy has created a huge amount of excess liquidity in the system that banks have ploughed into two and three year debt issued by Fannie Mae (FNM) and Freddie Mac (FRE). If the Fed were to return to buying agency debt it would jeopardize crowding out the market.

On a related note, despite the rhetoric calling for “doing something” about Fannie and Freddie, any threat to the government’s implied guarantee would jeopardize the capital of the banks holding their two to three year debt. The reality is that with 9 out of 10 mortgages currently guaranteed by the two agencies, removing Fannie and Freddie from government backing would be the fastest way to kill the government subsidized housing market and take the entire world’s financial system with it.

Mars enters Libra July 29, concluding a two year cycle of action that began August 19, 2008 when the Fed took bold steps to combat the financial crisis that spiraled out of control from too many collateral calls resulting from a loss of confidence in trading partners (Libra). Combined with the transits to the natal positions in the Fed’s chart by Saturn in Libra and Uranus in Aries, the markets could act in shock as it awakens to the reality that the Fed cannot be more accommodative. Uranus exactly squaring the Fed’s Pluto the day of the August 10 FOMC meeting could be the venue for the wakeup call.

Jupiter represents economic expansion and inflation. Although Bernanke and the Fed continue to reiterate that inflation risks are low, Jupiter opposing Saturn reflects what Bernanke said in his statement that “the risks to the inflation outlook are roughly balanced.” (It should be noted that banks are tipping Libra’s scales toward inflation. Fifth Third Bank (FITB) is concerned about rising rate risk now and is unwilling to hold any mortgages in its own portfolio. Other banks such as Key Bank (KEY) are not buying agency MBS beyond 2.5 years.)

While the Fed continues to reinvest the proceeds from maturing Treasuries into new shares with similar maturities, Bernanke said in his statement that “at some point” the Fed will shift into shorter term Treasuries to gradually get its balance sheet back to pre-crisis levels. This might not be reflected immediately in the Fed’s balance sheet because they roll over higher interest rate agency securities to more current lower interest rate agency securities, reflecting an increased face value based upon the trading prices.

While Bernanke’s statement touched on running off the Fed’s balance sheet and discussing how the Fed is preparing for when it will need to remove monetary policy accommodation, no mention was made about what the Fed could still do if economic conditions became far worse than the Fed anticipates.

In questioning, Bernanke made it clear that the Fed cannot stimulate lending because the problem is a collateral issue. Bernanke discussed the Fed's three options:

Telling the Senators that “clearly each of these options has got drawbacks and potential costs” while making no mention of any upside potential, shows Bernanke realizes taking any of these actions could cause more harm than good to the economy. Bernanke’s testimony reflects that this time the Fed is more fearful of doing more than doing less.

The consumer/housing/financial services based economy will not be revived. It will be replaced with a new industrial and technology based economy as the U.S. returns to producing tangible products and services. The cardinal planetary alignments that I have described are sowing the seeds of this transition that will unfold over the next 10 years as it experiences its birthing pains in the next 5 years.

Although in the short term there will still be plenty of toxic fallout from the old economy that will cause periods of market turmoil, before the year ends we should see evidence that the bears who believe another Great Depression is upon us and the bulls who believe the old economy can be revived are both barking up the wrong tree.

*The cardinal signs are Aries, Cancer, Libra, and Capricorn.

**The zodiac sign rising on the eastern horizon at the time the Fed came into being.

***A mathematical calculation that moves the planets forward in time as a method of prediction.

I do agree with the fact that the stimulative policy has found its limits, basically, and now market needs new inventions to be sustained artificially, as it always was sustained by the way...

Some speak of a new currency that may allow to discharge many debts cumulated in the time of high volatility a nd speculatiosn that transferred tons of amount of money in few, very few bags and pockets...