Demoting Pluto Did Not Prevent the Financial Crisis 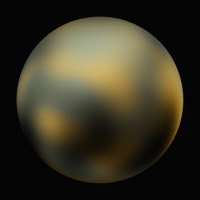 It is ironic that the world’s first major financial crisis involving sovereign debt is in Greece whose ancient civilization paved the foundation for modern math, science, medicine, architecture, philosophy, and democratic principles.

In Greek mythology Plouton was known as “the rich one.” The Greek god of wealth was also called Hades (“the unseen”), as Plouton’s riches derived from wealth that lies beneath the surface.

The Romans called the lord of the underworld Pluto, derived from the Greek ploutos (“wealth”). Wealth accumulated under the surface - from mining Earth’s natural resources, the underground economy, or trading opaque financial instruments, is all part of Pluto’s domain.

Pluto rules debt which if properly used can increase wealth or result in bankruptcy and poverty. A mortgage is French for “dead pledge,” meaning the debt does not die just because the borrower turns in the keys to the lender. Welfare makes the individual or company beholden to the person or group with the wealth and power to control them.

Pluto was discovered 80 years ago today – less than four months after the stock market crash of 1929 and the Great Depression that followed it. Pluto was in Cancer, a sign ruling food, real estate, and personal security. People lost their savings from banks going under, their homes, and crops destroyed by draught. Pluto represents catastrophic events of human or natural origins that have an effect on a massive scale as a way of forcing transformation that is long overdue.

By the time NASA launched the New Horizons probe to Pluto in early 2006, the economy was in a real estate bubble fueled by ultra low interest rates and easy credit. Pluto was in Jupiter-ruled Sagittarius, and as real estate and stock prices climbed higher and higher, the leverage expanded.

Pluto represents deep seated issues, things we’d rather keep suppressed because we’re afraid the energy is just too intense to handle (Pluto rules nuclear energy). Maybe that’s why the International Astronomical Union on August 24, 2006 voted to “demote” Pluto to a “dwarf” planet, hoping the action would prevent the bubble based on real estate collateral from bursting. The vote occurred one week before Saturn in Leo made the first of three oppositions to Neptune in Aquarius, indicating credit (Neptune) would begin to contract (Saturn).

When Pluto entered Saturn-ruled Capricorn in January 2008, the credit contraction led to a full blown crisis that began with losses related to adjustable-rate subprime mortgages. As Saturn in Libra began to square Pluto in November 2009, it became evident that Wall St. and Main St. weren’t the only ones who took on too much debt. Capricorn and its planetary ruler Saturn represent government. Saturn squaring Pluto in Capricorn reflects that belt tightening is required to get a grip on sovereign debt.

Pluto forces change by destroying what no longer works so it can be transformed and birthed into something more viable. Pluto in Capricorn until 2024 will not allow governments to postpone making hard choices regarding debt, taxation, retirement, and insurance benefits. On the 80th anniversary of Pluto’s discovery, President Obama signed an executive order establishing a new bipartisan commission on Fiscal Responsibility and Reform after the Senate failed to approve legislation that would force Congress to vote on these issues. Pluto in Capricorn is not the time to pay lip service to debt problems by keeping the real numbers hidden through accounting treatments or tax tricks. Governments who fail to act to create long term sustainability and instead focus on what they believe to be politically expedient will only prolong the pain and postpone an economic recovery. Pluto in Capricorn requires the courage to relinquish the failed policies of the past.

As astronomer Ken Croswell pointed out in an op-ed piece in today’s Wall Street Journal (“Ninth Rock From the Sun”), a 2009 CNN.com poll found an overwhelming majority of Americans favor returning Pluto to its full planetary status. The Moon represents the public and at the time of Pluto’s discovery, the Moon was in Pluto-ruled Scorpio in a harmonious relationship to Pluto in Moon-ruled Cancer. Americans are most passionate about the issue since the Moon in Scorpio at Pluto’s discovery exactly harmonizes with the USA’s Sun (self-identity) in Cancer.

For a 20 year period every 248 years, Pluto moves inside Neptune’s orbit. Neptune represents communism/socialism and fervent religious/spiritual beliefs. Pluto can turn Neptune’s beliefs into fundamentalism. From January 23, 1979 to February 11, 1999 Pluto was closer to Earth than Neptune. The Shah was overthrown and Iran became an Islamic Republic. Religious fundamentalist groups became far more involved in U.S. politics, seeking to erode individual rights in Pluto-ruled matters of sexuality, life, and death.

Pluto was closest to the Earth on November 4, 1989, just days before the fall of the Berlin Wall which was followed by the collapse of communism in the Pluto-ruled Soviet empire. Saturn was conjoining Neptune in Capricorn at the time, indicating not only that a physical barrier would dissolve that separated communism from capitalism, but the structure of the communist government (Saturn in Capricorn) would disintegrate as well.

The Saturn/Neptune conjunction during 1989-90 marked the start of a new economic cycle that as previously described peaked in mid-2007. The root origin of the financial crisis began with the Tax Reform Act enacted on October 22, 1986. Pluto rules taxes and loans. Interest paid on consumer loans were no longer deductible, while the limits on the home mortgage interest deduction increased.

Neptune exactly opposing the USA’s natal Venus (money, banks) in Cancer (real estate) and Pluto in its “home” sign Scorpio (lending) forming a harmonious aspect to the USA Jupiter in Cancer, sowed the seeds of using real estate to extract cash. The use of home equity loans extended beyond home improvements and began to be used to pay off other debt or take on more debt as the value (Venus) of the home increased.

In 2001 as Saturn in Gemini opposed Pluto in Sagittarius, the Federal Reserve (with its Sun in Capricorn opposing Pluto in Cancer and Moon in Scorpio) had an epiphany that they could restore the economy suffering from the collapse of the tech bubble and the 9/11 terrorist attacks by promoting real estate as a vehicle to generate more equity and subsequently more collateralized lending to consumers. People wouldn’t notice that wages were stagnant to deteriorating and the true cost of living was increasing as long as they could use their home as an ATM machine. As Saturn opposed Neptune and Pluto entered Capricorn, home values and credit began to contract, leaving borrowers with a mountain of debt.

During the housing boom, 70% of the U.S. economy was consumer driven. July and August 2010 mark the start of a new era in the U.S. economy as new technology (Jupiter conjoining Uranus in Aries) opposes Aries ruled Mars which conjoins Saturn in Libra with all of these planets squaring Pluto in Capricorn. Uranus was in Aries when Pluto was discovered and Saturn and Pluto are again in cardinal (action-oriented) signs that reflect the economic challenges that must be dealt with. The Federal Reserve and the government will be forced to wake up to the fact that the consumer driven economy is not a balanced economy and cannot be resurrected. Foreclosures will rapidly rise and consumers will learn the lesson that homes are used for utilitarian purposes rather than as a financial instrument. A new industrial revolution is about to begin that will lead to the rebirth of the U.S. as a technological and industrial leader.

Astronomy is considered to be a science. Yet science is supposed to require evidence in order for a theory to become a fact. The I.A.U. was too impatient to wait until 2015 for data from the New Horizons probe to support or discredit the theory voted on by a minority of astronomers that Pluto is not a planet.

Between 2010 and 2015 Uranus in Aries will square Pluto in Capricorn. These energies will bring about many new discoveries and technological advances as there’s a newfound eagerness to explore the unknown and break through the barriers of what is considered impossible or improbable. Astronomers demoted Pluto yet people are starting to recognize it is time to master Pluto’s energies by tapping the wealth and power inherent within each individual. This is not welcome news to the plutocrats who would prefer to keep the public debt dependent and in the dark.

Notes:
Pluto was discovered by astronomer Clyde Tombaugh at the Lowell Observatory in Flagstaff Arizona on February 18, 1930 at 4:00 PM MST.

NASA’s New Horizons space probe launched from Cape Canaveral on January 19, 2006 at 2:00 PM EST. New Horizons is scheduled to make a flyby of Pluto on July 14, 2015 at 11:47 UTC, and its Moons Charon (the ferryman), Nix (Charon’s mother, the Greek goddess of darkness and light that synthesizes with Pluto’s intense energy), and Hydra (the 9 headed serpent guarding the waters of the underworld).

Fascinating post. Thank you. In one of those synchronicities of life, I woke up this morning with Pluto on my mind, and the insight that it will be about dominance over the earth's natural resources, among other things of course. Then this morning I opened your blog and find that this is the anniversary of Pluto's discovery!

I read you regularly as support for my blog.

Thanks for this explanation, most helpful.