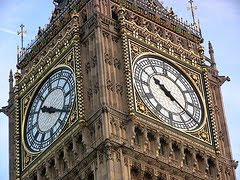 Capricorn and its planetary ruler Saturn represent time and how we keep track of it. Every year when the Sun enters Capricorn (December 21 to January 19*) we become even more conscious of time. Millions of people around the world wait for hours on New Year’s Eve for the clock to strike midnight in their time zone. At that moment a new calendar year has begun.

It’s about time, just in time, time is money – these have become some of the most popular expressions of all time. History, government, corporate, societal structures and matters of global importance fall under Capricorn and Saturn’s domain. With Pluto in Capricorn from 2008-2024, time as we currently know it will be transformed in a number of ways.

Recent articles in the Financial Times, The New York Times and The Wall Street Journal describe the history of tracking time and how it affects our economic, political, cultural, and biological functions.

From the beginning, humans kept track of time by observing the cycles of the Sun and Moon. Every town operated on its own local time originally calculated with sun dials. Calendars were developed to mark the four seasons of the year beginning with the start of Spring at the Vernal Equinox** to organize time around agriculture and religious observances.

Many calendars have developed over the centuries, each one attempting to better reconcile the relationship between Earth and the Sun and Moon. Since the Earth takes 365.2422 days to cycle around the Sun from one Vernal Equinox to the next, creating a calendar that neatly divides this time has been a challenge as a leap year will periodically have to be added to account for the time beyond the 365 days the Earth takes to orbit the Sun.

In “Time and Again, the Calendar Comes Up Short,” Charles Forelle describes the history of calendars from Julius Caesar’s Julian calendar to modern attempts at creating a perpetual calendar and how religious and political views have determined what kind of calendar the world uses. The Gregorian calendar is the world’s currently accepted civil calendar and was devised by Pope Gregory XIII in 1582 to return the Vernal Equinox to around March 21 to correlate to the Catholic Church’s original celebration of Easter which occurs on the first Sunday after the first Full Moon after the Vernal Equinox. England was reluctant to adopt a Pope created calendar after King Henry VIII broke with Rome in order to divorce his first wife and marry Anne Boleyn. The time for the coronation of their daughter Elizabeth I was calculated by Elizabeth’s astrologer John Dee who created a calendar system more accurate than the Pope’s but it was never used and England remained on the Julian calendar until 1752.

In the 1950s the UN introduced a “World Calendar” that begins each month on a Sunday, with each month consisting of 30 or 31 days and each quarter 91 days. An additional day called “Worldsday” was added on at the end of each year. Since Worldsday created eight days between Saturday and Sunday, religious objections forced the UN to drop the idea. Now the World Calendar Association is trying to get the UN calendar adopted in 2012 which begins on a Sunday, the day of the week ruled by the Sun.***

Despite England being a late adaptor to the Gregorian calendar, the UK’s natal Sun in Capricorn reflects that modern Britain would become the global leader in timekeeping. As the FT’s Clive Cookson explains in “Hour power,” the arrival of public transportation necessitated the need to develop a time standard to create railroad timetables which were first developed by Great Western Railroad in 1840. Big Ben is the most famous clock in the world, and the first accurate atomic clock was created in Britain in 1955.

In 1884 Greenwich in southeast London officially became the prime meridian (zero degrees longitude) of the world with every world time zone calculated by how many hours a geographic location is ahead or behind Greenwich Mean Time (GMT). Just like calendars, there is disagreement among nations regarding whether to abolish leap seconds from Universal Time Coordinated (UTC) to keep the link between clocks and the earth’s rotation. The US, France, Russia, and Italy want leap seconds abolished while China and the UK want to keep them.

Time is money, and London has made the most of its position as a “time bridge” since its business day overlaps with the Americas and Asia. In December 2007, Venezuelan president Hugo Chavez decided to change the country’s time zone to -4.30 from -4.00 hours GMT. Perhaps Chavez was inspired by Mao Zedong who in 1949 replaced China’s five time zones with “Beijing time” to symbolize a new and unified communist nation.

Russian president Dmitry Medvedev has proposed consolidating the country’s 11 time zones into four in the name of economic efficiency despite concerns that fewer time zones would use more energy and take a toll on the body’s circadian rhythms. The Sun is our life force and symbolizes who we are, reflecting that a human’s internal clock “depends on sun time rather than social time.” Studies have shown that moving clocks forward to Daylight Savings Time increases the number of accidents and decreases sleep time immediately following the time switch.

Cronus is the Greek name for Saturn. In “Enter the Chronotherapists” Olivia Judson predicts the next big thing in healthcare will be chronotherapy, or therapy by the clock overseen by your personal chronoconsultant.

Just as we are affected by planetary cycles, our internal clock influences how our bodies change throughout the day. Muscles are stronger in the afternoon than in the morning. Breast milk changes during the day. Evening milk is full of compounds that make a baby sleepy; morning milk isn’t. Breast cancers grow faster during the day than at night.

Chronotherapy helps to create better health and promote healing by working in harmony with the body’s circadian rhythm. Refraining from eating at night and getting sufficient sleep in a dark room can help to prevent obesity as well as inhibit the growth of tumors. Taking medication at a certain time of day can increase its effectiveness and decrease the dosage needed. Simple measures like these keep people healthier and save money.

I am confident that chronotherapy will become an accepted healthcare practice while Pluto is in Capricorn, as governments seek to implement various cost effective treatments to contain out of control medical costs and promote a more holistic lifestyle. The next level would be to take the timing of planetary movements into consideration for better health and economic wellbeing.

*These dates can slightly vary from year to year.

**The Vernal Equinox begins when the Sun enters Aries, the first sign of the zodiac.

Traditional Chinese Medicine uses the body's natural cycles and has for thousands of years. What goes around, comes around.