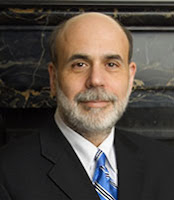 “Was Bank of America forced to go through with the deal, or was this just an old fashioned shakedown? These questions are particularly important given the Administration’s new proposal to give broad, new powers to the Federal Reserve. It’s time to yank the shroud off the Fed and shine some light on these events.” – House Oversight and Government Reform Committee Chairman Edolphus Towns

Suffice it to say I enjoy hearing people articulate the message of planetary alignments! In “Obama’s Regulatory Reform Removes the Punch Bowl from the Fed,” I wrote:

“The Sun/Pluto opposition is transiting the Federal Reserve’s natal Sun in Capricorn opposite its Pluto in Cancer, reinforcing the need to shed light on the Fed’s secretive dealings and restructure its identity.”

The Sun represents leaders, and the Summer Solstice/Cancer New Moon opposing Pluto in Capricorn this week is shining the spotlight on Ben Bernanke’s performance as Fed Chairman. Asked by reporters during news conferences this week if Bernanke is doing a good job, President Obama and the White House press secretary have uttered tepid support for the Fed Chairman.

One area that is gaining bipartisan support in Congress is the suspicion that the Fed Chairman has not been forthcoming about the secret deal Bernanke and former Treasury Secretary Hank Paulson struck with Bank of America (BAC) CEO Ken Lewis to ensure BofA consummated its purchase of Merrill Lynch.

Following Ken Lewis’ testimony before the House Oversight Committee two weeks ago, Bernanke vigorously defended his actions before the committee yesterday, saying he “had nothing to regret about the whole transaction” and he “acted with the highest level of integrity under highly unusual circumstances.” Throughout the hearing the Fed Chairman emphasized that if the deal failed to go through, it would have injected broader systemic risk into an already fragile financial system. Bernanke’s remarks insinuated the end justified the means. Bernanke said that financial conditions have improved since then, Merrill has become profitable now for BofA, and BofA never needed ringfencing on a $118 billion pool of mostly Merrill assets and now believes the protection is no longer needed.

Despite being appointed by President George W. Bush, Rep. Darrell Issa, the ranking Republican member of the committee, accused Bernanke of a “cover up” in response to his denials that he did not say nor did he tell Paulson to tell Ken Lewis that Lewis and BofA’s Board would be fired if Lewis invoked a MAC (material adverse change) clause to break the deal with Merrill. When Bernanke was asked if Paulson lied giving his deposition to New York AG Cuomo that Bernanke had told him to tell Ken Lewis that he and his Board would be fired, Bernanke responded that he believed Paulson had “modified that statement” after the deposition. (It will be interesting to hear what Paulson says when he testifies before the Committee in July.)

As the hearing went on, Bernanke more frequently answered questions by saying he “didn’t recall.” When Rep. Dan Burton questioned Bernanke, he remarked that it’s been his experience that “people often use such language to avoid perjuring themselves.”

When Rep. Burton asked Bernanke if Richmond FRB president Jeffrey Lacker was “lying” in a Dec 20 email (see page 2) that “management is gone” if Lewis invokes the MAC, Bernanke responded that Lacker was “summarizing a long conversation,” so he couldn’t remember if he “did or did not” say that. Rep. Jason Chaffetz wanted to know how Bernanke “advising” Lewis not to invoke the MAC was not a threat. Or as Rep. Elijah Cummings described the committee’s conclusion of the hearing with Ken Lewis: “There was not a person in this room who didn’t understand Ken Lewis was not threatened.” Bernanke insisted that Ken Lewis always had the ability to exercise his free will as “We don’t control his destiny unconditionally.”

In trying to gauge Bernanke’s defense that systemic risk warranted the actions that were taken, Bernanke was asked if it was the Fed’s decision to allow Lehman to fail. Despite the Fed’s authority under Section 13.3 to lend to “any individual, partnership, or corporation” in “unusual and exigent circumstances,” Bernanke once again cited the Fed had “no legal authority” to lend to Lehman. He said that only after Congress passed the TARP were the tools available to have saved Lehman. (Bernanke conveniently forgot the Fed invoked Section 13.3 to prop up AIG 48 hours after Lehman collapsed.) Bernanke also said he had “no way to compel Ken Lewis to buy Lehman.” On AIG, Rep. John Tierney told Bernanke that “the Fed rolled over and paid out to the banks” when it should have negotiated with AIG’s counterparties. Tierney requested copies of all documents related to the Fed’s deals with AIG’s counterparties, contracts, and documents related to the creation of Maiden Lane III.

Rep. Jim Jordan wanted to know when Bernanke knew the TARP wouldn’t be used to buy toxic assets. Bernanke said he found out 10 days after Congress passed the bill, explaining that the global banking crisis required “a complete change of strategy”* and the program “would take some months to put into operation.” Bernanke said he was not in contact with the nine bank chief executives that Paulson called to Washington on October 13 to take TARP as “it was Paulson’s decision.”

Bernanke said he “initially thought there might have been some attempt by Ken Lewis to get a subsidy,” by threatening to invoke the MAC, but after meeting with him he got the impression Lewis was “genuinely undecided” about whether or not to go forward with the deal. Rep. Dennis Kucinich questioned the Fed’s judgment in providing additional financial support to BofA without demanding management changes recommended by Fed staffers as the Fed became aware of Merrill’s accelerated losses in mid November. Bernanke said he didn’t know the amount of Merrill’s losses as the Fed was involved in Merrill’s oversight in a “light way” since Merrill was not a bank.

Bernanke was questioned why the Fed did not inform the SEC about the situation. Bernanke made it clear that “we all have our spheres of responsibility” and that it was BofA’s responsibility to inform the SEC. He said the regulators most relevant to the deal were FDIC Chairman Sheila Bair and OCC Chairman John Dugan whom he personally notified. Bernanke said When Rep. Jackie Speier commented that “we’re all one government,” Bernanke replied that he “followed the law exactly” as the Fed’s disclosure requirements are “explicitly set out in the Emergency Economic Stabilization Act of 2008” that requires the Fed to publicly disclose lending money to a financial institution within one week of the loan.

When asked by Rep. John Duncan if the Fed is operating with too much secrecy, Bernanke defended his "enormous strides under my Chairmanship to expand the information we release." Bernanke expressed his concern that a complete audit of the Fed by the GAO could compromise the Fed’s independence and interfere with monetary policy.

As Committee Chairman Towns said in his closing remarks: “We got a peek but don’t have full sunshine yet.”

*If Bernanke understood planetary cycles, he could have said: “Look, Mercury was retrograde then. New endeavors begun when Mercury is retrograde tend to turn out different than originally anticipated. Plans tend to get changed or reversed.” ;-)