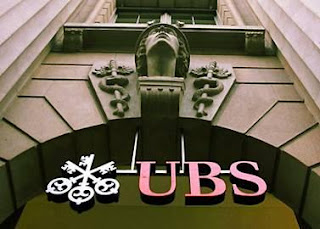 Today Attorney General Eric Holder was scheduled to meet with his Swiss counterpart, Eveline Widmer-Schlumpf. Their final topic of discussion was to be the Justice Department’s February 19 lawsuit ordering UBS AG to disclose the identities of all 52,000 US customers with Swiss bank accounts to the IRS.

The US government’s move to obtain the Swiss bank’s entire US account holder records came a day after UBS had reached a deferred prosecution agreement with the US Department of Justice, admitting it broke US tax laws. In a move that marked the first time the Swiss government allowed one of its banks to reveal the identification of account holders, UBS turned over the files of 250 American clients suspected of committing tax fraud to the Justice Department and agreed to cease its cross-border business that solicited new US clients through events such as Art Basel in Miami Beach and the Sony Ericsson tennis tournament in Key Biscayne. Additionally, UBS agreed to pay a $780 million fine to the US government. $400 million of the fine represented taxes the bank failed to report on US clients offshore investment income as part of an agreement UBS had voluntarily entered into with the IRS after it purchased Paine Webber in 2000.

UBS AG was founded on June 29, 1998 after the merger between the Union Bank of Switzerland (UBS) and Swiss Bank Corporation (SBC). As a remnant from the original banks, UBS is headquartered in Basel and Zurich. UBS’s three keys logo represents “confidence, security, and discretion.”* Dualistic Mercury presides over UBS’s Zurich headquarters**, a caduceus flanking each side of his head for harmony and balance. Mercury is the messenger and the traveling salesman, the planetary patron of commerce as well as liars and thieves. UBS AG came into being with its Mercury opposite Neptune, bestowing the potential to engage in deceitful practices in order to solicit business. A few of the private bankers based in Geneva, Lugano, and Zurich would travel to the US with the instructions to tell US Customs they were here for vacation. Venus rules money and all items of value such as jewelry and artwork. UBS’s natal Venus opposite Pluto describes how Bradley Birkenfeld, the former Geneva-based banker who the US indicted in May 2008 and is now cooperating with the Justice Department, said he squeezed diamonds (Venus) into tubes of toothpaste to help a client transfer assets without detection (Pluto). Venus opposite Pluto reflects the ability for UBS to attract high net worth clients and could also reflect the potential that a lot of their client work is related to trusts, wills and estates. Venus opposite Pluto in UBS AG’s chart also describes tax troubles.

Taxes as well as secrets are ruled by Pluto, and Capricorn represents governments. With Pluto in Capricorn from 2008-2024, governments will be working overtime to bring in additional tax revenue to offset mountainous deficits. With Pluto in Capricorn now opposing the USA’s natal Venus, the US government will be particularly aggressive in going after wealthy individuals and the bankers and financial advisors who assist them in hiding taxable assets.

UBS’s Mercury in Cancer exactly opposes the USA’s natal Pluto in Capricorn, indicating tax disputes arising over the company’s motives and methods of transacting business. The IRS operates under the assumption individuals and corporations are guilty until proven innocent. This is in stark contrast to Article 47 of the Swiss Federal Bank Act of November 8, 1934 where a banker can face criminal charges for breaching client confidentiality:

“Any violation of bank client confidentiality, whether through negligence or intentionally, is punishable by a prison sentence (maximum 6 months) or by a fine of up to CHF 50,000 (CHF 30,000 in case of negligence). Violating bank client confidentiality remains a punishable offence even after the relationship with the client has come to an end or the banker has ceased his/her professional activity.”

The Act’s Sun conjoining Venus in Pluto-ruled Scorpio reflects Switzerland is the heart of private banking. The financial industry generates over 10% of the country’s economic output and employs 5% of the workforce. Mercury retrograde*** conjoins Jupiter in Scorpio, indicating the law can be subject to slight revisions from time to time, but the philosophy of trust in protecting bank client information from inquisitive foreign governments will be upheld unless evidence of tax fraud has been committed. A Swiss financial oversight court has ordered UBS not to fulfill the US government’s demand for all 52,000 US client records. The Act’s Pluto opposing the USA’s Pluto reflects the disagreement between the US and Switzerland regarding law enforcement and financial privacy.

*The three keys logo originated from SBC.
**UBS was located in this building for many years prior to their 1998 merger with SBC.
***Planets do not really move backwards, but appear to from Earth’s vantage point.

Most of the background material for this post came from articles in the Financial Times.