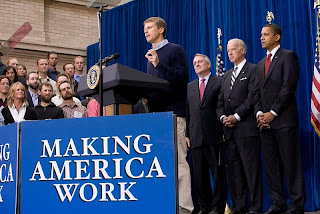 If you’ve taken a yoga class or watched the ceremony leading up to President Obama signing the American Recovery & Reinvestment Act (ARRA) February 17, you’ve heard of Namaste. Just don’t go by the Vice President’s pronunciation of it.

Namaste (“nah-mah-stay”) is a Sanskrit word that represents a sacred greeting of respect. I place my hands together against my heart as if in prayer and bow in respect to the divine within you. Namaste usually marks the conclusion of a yoga class as the students bow to the teacher and the teacher to the students in recognition that on a soul level we are all one.

According to the company’s website, Namaste Solar Electric was named to honor this principle. Just as the heart is the life force and center of the body’s energy system, the Sun as the center of our solar system gives life to the Earth. The Sun rules the heart and the sign Leo. Our Solar Leo President must have felt he needed to create a dramatic set piece to divert attention from the fact that way beyond the pork barrel center of the stimulus solar system lies a small planetoid called Energy ($43 billion of ARRA’s $787 billion). And that’s where Namaste Solar comes in.

Incorporated in Colorado on February 2, 2005, Namaste Solar has the Sun in Leo’s opposite sign, Aquarius. Aquarius and its planetary ruler Uranus rule electricity. The company’s solar photovoltaic (PV) cells convert the Sun’s light (photons) into electricity through the design and installation of solar panel systems. Aquarius energy represents the spirit of namaste as each individual is unique yet equal to everyone else in the group. This is strongly reflected in Namaste Solar’s Sun conjoining Neptune in Aquarius, the dream (Neptune) of harnessing the power of the Sun to generate electricity (Aquarius). Neptune energy is socialistic and Aquarius represents equality. The company is 100% employee-owned. Mercury (communications) conjoining Venus (partnerships; fairness) in Aquarius describes the company’s “diverse ideas and fresh ways of thinking” that “utilize a democratic process for decision-making.” This is further reinforced by the company’s Sun in Aquarius harmonizing with Jupiter (corporate philosophy) in Venus-ruled Libra.

I’d be curious to know when the Administration contacted Blake Jones, Namaste Solar’s president, about speaking at the stimulus signing ceremony. That’s because both Namaste Solar and the stimulus* carry the energies of the Sun conjoining Neptune in Aquarius. The Sun rules theatrical staging and Neptune rules glamour and illusion. Weather wise, Neptune rules clouds and fog which obscure the sunlight of transparency. Jones was specifically instructed by the White House not to wear a suit and tie, and his speech sounded so artificial that I wondered if I was watching C-SPAN or Saturday Night Live.

The Sun/Neptune describes a company and its chief executive as a “feel good” story. Blake Jones had been a civil engineer and project manager for Halliburton/Brown & Root before he saw the light in November 2004, thanks to the passage of Amendment 37 that mandated a certain percentage of Colorado’s electricity had to come from renewable sources – particularly solar energy. By 2006, Namaste Solar had installed more solar PV systems in Colorado than any other company including the governor’s mansion and the Denver Museum of Nature and Science, the site for the stimulus bill ceremony.

Uranus has been in Pisces since 2003. Pisces is ruled by Neptune which reinforces the feel good factor. The company touts it drives Toyota Prius hybrids** (which would take 8 years to reap the cost savings based on $4 a gallon gas), and donates 1% of its revenues every year by installing its systems at non-profit organizations. An eco conscious lifestyle is politically and socially correct even if it’s not always economically efficient. An example is photos showing almost all of the company’s solar panels installed on large homes. The average price range of a solar residential installation ranges from $5,000 to $15,000 after government and utility rebates and incentives. And you’ll still have to rely on the electrical grid. Namaste Solar’s FAQ says the panels can withstand 60 mph hail, but the company doesn’t mention if the panels can withstand a hurricane. And they won’t be operable when snow covered. Another thing the company doesn’t mention is the need to periodically clean the solar panels so they operate at maximum efficiency.

Saturn in Virgo opposing Uranus in Pisces (2008-2010) together with Pluto in Capricorn (2008-2024) represents a cycle of physical and mental clean up of wasteful excesses in business, government, and society at large. Solar panels are a trend that went bust in the 1970s and will do so again. Even Namaste Solar’s FAQ acknowledges that “energy efficiency improvements are the ‘low hanging fruit.’” A quicker and greater financial return can be achieved through cheaper and more universally adaptable ways such as new and more energy efficient appliances (particularly a front load washer), heating and cooling systems, programmable thermostats, caulking, insulation, window treatments, new windows, light bulbs, and exterior solar powered lighting .

A more practical commercial solar installation application would be solar heated steam turbine generated electricity situated in the desert southwestern areas of the US. Solar powered generators for electrical grid interruptions from hurricanes and ice storms might also be practical. Uranus will temporarily move into Aries from May to August 2010 before beginning a seven year sojourn in March 2011. Between 2010 and 2016, Uranus in Aries challenging Pluto in Capricorn will rapidly usher in an era of new energy technologies that only previously existed within the military. Historical concepts previously discounted as too expensive for practical use will be engineered into new applications that are practical to use at the individual level. Capricorn and its planetary ruler Saturn represent structural foundations, and this is when solar energy generation gets integrated into everyday building products. Use of high tech paints and finishes that collect solar energy integrated into everyday building products could start to take hold during the transition from Uranus in Pisces to Aries (2010-11) as Pisces rules chemicals and finishes.

*The Sun exactly conjoined Neptune on February 12, 2009, the day House and Senate negotiators agreed to the final version of the stimulus bill. This alignment occurs once a year.

**Namaste Solar buying foreign cars was ironic coming on the same day day Chrysler and General Motors had to file their viability plans requesting more financial aid from the government.