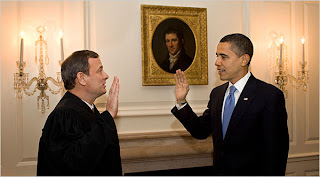 This post is in response to emails asking me if the date and time that President Obama retook the Oath of Office represents the planetary energies of the Obama Administration instead of Inauguration Day at Noon.

When Mercury is retrograde* (January 11 – February 1, 2009), communication errors and mistakes in speech tend to be more pronounced. Because their profession is Mercury ruled, news anchors are particularly prone to mispronouncing words and flubbing up their lines when Mercury is retrograde. The energies of Mercury retrograde will also tend to be more pronounced if Mercury turns retrograde on a planet or important point in a person or entity’s chart. And that’s exactly what happened to John Roberts as Mercury stationed retrograde on his natal Sun in Aquarius, affecting his communications while performing his duties as Chief Justice of the United States. Mercury retrograde in Aquarius created a lot of nervous energy, as Aquarius is known for deviating from standard operating procedure, affecting even a superior communicator like Barack Obama.

President Obama recited the words of the Oath of Office but did so out of order. The last paragraph of ARTICLE II. SECTION I. of the The Constitution of the United States of America reads:

“Before he enter on the Execution of his Office, he shall take the following Oath or Affirmation: - ‘I do solemnly swear (or affirm) that I will faithfully execute the Office of President of the United States, and will to the best of my Ability, preserve, protect and defend the Constitution of the United States.’”

So on Wednesday, January 21, 2009 at 7:35 PM, Chief Justice Roberts re-administered the Oath of Office to President Obama. The energies of Mercury retrograde are more attuned to slowing down than moving at warp speed, since slowing down allows us to be more consciously aware of our thoughts and actions – and get it right. Whether or not the President is aware Mercury is retrograde, The New York Times reported that when Chief Justice Roberts asked him if he was ready to take the oath, President Obama appropriately replied: “I am. And we’re going to do it very slowly.”

As to when Barack Obama officially became President Obama, AMENDMENT XX SECTION I. of The Constitution (see link above) states:

The 20th Amendment (ratified January 23, 1933) took effect beginning with the second inauguration of President Roosevelt in 1937.** Barack Obama was officially the President almost six minutes before he actually took the Oath of Office the first time. President Obama had already signed two executive orders and issued four memoranda and a presidential proclamation before retaking the Oath Wednesday evening.

The President’s retaking of the Oath of Office represents an event that took place for the purpose of rightfully squashing petty chatter seeking to question whether Obama is legitimately the President for failing to recite the Oath of Office exactly as written in the Constitution. Early that day Mercury had moved back into Capricorn, increasing the concern to adhere to formalities and ensure that President Obama’s authority could not be questioned. The Moon in Sagittarius reinforces it was a ceremony conducted for legal purposes as Sagittarius rules the judicial system. Obviously a reporter would have to ask the President to know for sure, but my sense is that if the redo ceremony held special significance for President Obama, the First Lady and his daughters would have been present.

The bottom line is that January 20, 2009 at Noon in Washington, DC represents the planetary energies President Obama will be working with or against, depending on what he chooses to do. Exploring these potentials will have to be the subject of a separate post.