Illinois Governor Blagojevich Gets Busted For His Birthday 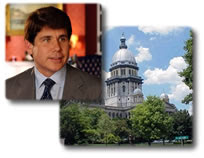 Today is Illinois governor Rod Blagojevich’s 52nd birthday. The governor probably hoped to celebrate his special day in style after receiving some big cash presents resulting from one of his “pay or play” bribes. And if the money didn’t materialize, Gov. Blagojevich figured he could gift himself President-Elect Obama’s vacated Senate seat.

Birthday plans were foiled yesterday when Blagojevich received a surprise 6:00 AM wakeup call announcing that there were two FBI agents standing outside his house with a warrant for his arrest. Venus in Aquarius challenging Blagojevich’s natal Neptune in Scorpio yesterday reflected that his dream of “monetizing” his position as governor through undercover bribes had come to an abrupt end. Blagojevich and chief of staff John Harris were released yesterday afternoon after being charged in federal court with conspiracy to commit mail and wire fraud and solicitation of bribery charges. The two men were released after each posted a $4,500 bond.

US Attorney Patrick Fitzgerald (the special prosecutor in the “Scooter” Libby trial) announced the allegations against Blagojevich and Harris at a news conference yesterday. The five year government probe known as “Operation Board Games” rapidly accelerated after the FBI learned that Blagojevich was attempting to accumulate $2.5 million in “contributions” before a new state ethics law took effect January 1 that limited the amount of money individuals and entities with Illinois state contracts valued at $50,000 or more could contribute.

Beyond trying to sell the Senate seat, Blagojevich was working multiple sources to raise money for himself, including:

Rod R. Blagojevich was born on December 10, 1956 on the northwest side of Chicago. He obtained a law degree from Pepperdine University and went to work as an Assistant State Attorney for Cook County. Blagojevich was elected to the Illinois General Assembly in 1992 before being elected to the US House of Representatives in 1996. Blagojevich was born with his Sun (self-identity) in Sagittarius. Sagittarius and its planetary ruler Jupiter rule ethics and “practicing what you preach.” Negatively manifested, these energies become hypocritical. With his Jupiter (optimism) in Virgo (health & hygiene), Blagojevich ran for governor in 2002 on a platform to “clean up” and “work aggressively to restore the people’s confidence in state government” after then Republican governor George Ryan was sentenced to 6.5 years prison for racketeering. Re-elected in 2007, Blagojevich said his “top priority is ensuring access to quality healthcare for everyone in Illinois.”

Blagojevich’s Jupiter in Virgo forms challenging alignments to his natal Mercury and Mars. Mars represents a person’s drive and physical energy. Mars in its “home” sign Aries opposing Jupiter reflects Blagojevich’s aggressiveness using the governorship to pursue his own self interests. Mercury represents a person’s communication style. Blagojevich’s Mercury in Capricorn challenging Mars and Jupiter is reflected in his fiery and angry temperament and heavy usage of curse words in his conversations. Jupiter/Sagittarius rule sports, and according to the DoJ report, Blagojevich “analogized his situation to that of a sports agent shopping a potential free agent to the highest bidder.”

Obama’s vacated Senate seat really motivated Blagojevich to negatively channel these planetary energies into overdrive. His grandiose ideas included trying to convince the President-Elect to get Warren Buffett and Bill Gates to contribute $10 to $15 million to start a non-profit organization he could run in return for an annual salary of $250-300,000 for naming Obama’s favored candidate for the seat. Blagojevich was interested in a cabinet post (Health & Human Services or Energy) or an Ambassadorship (Jupiter/Sagittarius rule foreign affairs). Virgo represents the work force especially organized labor, and Blagojevich’s Jupiter in Virgo describes how he pressed a union official from the Service Employees International Union (SEIU) for a job in exchange for pushing the SEIU’s political agenda, notably their advocacy of the Employee Free Choice Act which would make it easier to organize labor unions. In exchange, Blagojevich would get a $300,000 salary as Executive Director of Change to Win, an SEIU organization. (That idea got nixed after the governor realized the position was already filled.)

Sensing he wouldn't get any cooperation from the President-Elect (as confirmed by Attorney Fitzgerald at his news conference), and with an associate of “Candidate #5" (reported to be Jesse Jackson Jr.) only offering to raise $500,000+, Blagojevich began thinking about sending himself to the Senate. He felt that if he got indicted as a Senator he could obtain more resources than if he got indicted as governor. As a Senator he would help to get his wife registered as a lobbyist or head a non-profit Board, and arrange speaking fees for himself after leaving public office – all in preparation for his run for President in 2016!

Saturn in Virgo began challenging Blagojevich’s Sagittarius Sun on October 21 when the FBI received permission to wiretap his campaign headquarters, reflecting the government’s (Saturn) concern over his conduct as the state’s chief executive (Sun). As Pluto (undercover investigations) was preparing to form a challenging alignment to Blagojevich’s Jupiter, the FBI expanded the wiretaps to cover his home. This planetary alignment became exact on November 16 - the day Obama resigned his Senate seat – and Blagojevich’s ethical lapses had indeed reached Jupiter-sized proportions.

Throughout 2009, Pluto in Capricorn will challenge Blagojevich’s natal Mercury and Mars while Saturn in Virgo challenges his Sun. The March 11 Full Moon in Virgo could bring key details to light. Blagojevich was born with the Moon (emotional outlook) in Pisces, which rules places of confinement such as prisons.* Without a birth time I cannot elaborate more specifically about the governor’s future potential prospects. He might try to play the “victim” role in court. However, Pluto in Capricorn is likely to increase the possibility that Blagojevich will be taking up residence in a new abode to payback society for his illegal conduct as a government official.

If convicted, the charges carry a maximum sentence between 10 to 20 years in prison and each count carries a maximum fine of $250,000. Perhaps the Democratic governor could share a cellblock with his predecessor, Republican governor George Ryan, who is currently serving his sentence for selling driver’s licenses for bribes.

The indictment of Illinois governor Rod Blagojevich during the Sagittarius Moon cycle is meant to shed light on the truth about how too many politicians continue to pay lip service to ethics rules and instituting meaningful ethical reform in government. As ruler of the judicial system, planetary transits in Sagittarius tend to bring out the most egregious legal cases surrounding an issue as a way to gain wisdom and cooperation in order to create the ideal code of conduct.

Saturn in Virgo opposing Uranus in Pisces from now through mid 2010 will bring more shocks and surprises concerning government employees breaking the rules. Pluto in Saturn-ruled Capricorn (2008-2024) reflects the deep level of government corruption whose toxins have accumulated to such dangerous levels that all governmental structures and their rules and regulations will have to be rebuilt from the ground up.

*This is only one of many potential meanings and manifestations of the Moon in Pisces. For example, a person with the Moon or planets in Pisces might work at a Pisces-ruled institution such as a prison, hospital, or do charitable work.