Federal Reserve Wants To Issue Its Own Line Of Debt 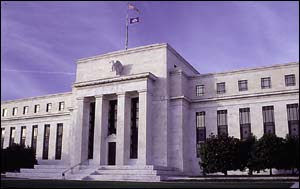 I’ve written before that Pluto in Capricorn conjoining the Sun of the Federal Reserve during
2008 to 2009 would greatly transform the Fed’s identity and purpose. This is already occurring as the Fed has created new programs and taken on new forms of collateral from institutions beyond its traditional scope.

Pluto rules debt and Capricorn the government, so it came as no surprise to me to read an article in The Wall Street Journal earlier this week that the Fed has approached Congress about issuing its own debt. Previously the Fed doubled the size of its balance sheet through deposits from the Treasury, raised through debt sales. Now that the Treasury is bumping up against the debt ceiling, it’s becoming more difficult to issue treasuries for the sole purpose of pumping up the Fed’s balance sheet. The Fed can print as much money as it wants but the Federal Reserve Act does not allow it to issue notes beyond currency.

It’s likely that the Fed will have to pay a slightly higher interest rate than the Treasury because it does not have taxing authority. Economists will debate whether the Fed’s borrowings will be “sterilized” or actually lead to an increase in the money supply. When the Fed borrows they would be withdrawing money from the banking system at the same time that they would be adding money via purchasing securities or other assets. So the purpose must be to transfer money from risk adverse investors to financial institutions holding high risk assets. For example, the Fed might buy credit card securitizations or MBSs funded by selling debt to investors who would be adverse to such risk. In essence this is a convoluted way of the Fed guaranteeing toxic (Pluto again!) assets.

To change the topic a bit, Pluto rules anything that is kept secret. Bloomberg reports it has filed a lawsuit under the Freedom of Information Act after the Fed denied its request under the Act for details about its new lending programs. I guess this is what the Fed and Treasury really mean when they say they’re “protecting the taxpayer,” as taxes are also ruled by Pluto.
Posted 12/13/2008 06:11:00 AM