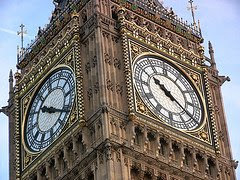 The Capricorn New Moon occurs on December 27 at 7:22 AM EST. Capricorn is ruled by Saturn, the planetary energy of caution, contraction, and structures of all kinds. It is appropriate that the New Moon occurs on a Satur(n)day, the day of the week ruled by the lord of the rings. As an earth sign, Capricorn is concerned with material and practical matters, possessing a driving ambition to reap the rewards and recognition that come from reaching the top of one’s profession. High places, from mountaintops to commercial and residential towers, are ruled by Capricorn/Saturn. This energy is determined and patient, preferring structures that are built or established for the long haul. Capricorn and Saturn represent the maturity that can only come through the knowledge and wisdom gained through experience and a historical perspective. Saturn rules time and all the methods we use to keep track of it, such as Big Ben (England is a Capricorn country). Our earthly time tracking system welcomes in the New Year when the Sun is in Capricorn.

New Moons reflect the overall energy pattern for the next month, and Capricorn is an initiating, take charge type of energy. This New Moon is particularly powerful as it occurs shortly after the Winter Solstice and features a lineup of six planets in Capricorn. The Moon and Sun conjoin Mars and Pluto, and Mercury conjoins Jupiter in Capricorn. These energies help to provide the courage (Sun) and confidence (Jupiter) to put plans (Mercury) into action (Mars) that transform (Pluto).

With Capricorn’s ruler Saturn in Virgo, any New Year’s resolutions that you strongly feel (Moon) you want to achieve is doable if you’re committed to making it happen. Saturn’s energies are particularly potent from December 28 to January 3 as Saturn is stationary, turning retrograde* on December 31 (until May 16, 2009). How synchronistic is it that Saturn turns retrograde on New Year’s Eve when everyone is waiting for the clock to strike or the ball in Times Square in Capricorn Manhattan to drop at midnight to “welcome” in the New Year?! Strong Saturn energies can represent delays and obstacles, as if time slows down. Law enforcement will be out in full force. It’s also interesting that Saturn is experiencing a “ring plane crossing” now giving the illusion that the planet’s famous rings have disappeared.

Saturn in Virgo is making a series of oppositions to Uranus in Pisces that started on Election Day and continues until mid-2010. Uranus (along with Pluto in Capricorn), serves to shake us up so that whether voluntarily or by force, we make the changes that are ultimately to our benefit. Key areas of life likely to experience the wakeup call are job/career/professional matters, health/diet/lifestyle, and schedules/routine matters. The Saturn/Uranus alignment can help us to be more efficient at what we have to do (Saturn in Virgo) to free us to pursue the things we want to do (Uranus in Pisces). Uranus rules Aquarius, and Venus conjoining Neptune in Aquarius now provides hope, sensitivity, and a feeling of connectedness with the world around us. (Go outside on New Year’s Eve and connect with the sky as the Moon will conjoin beautiful Venus in the southwest at sunset.) With a total of seven of the ten planets** in the earth element, any “spacyness” resulting from this combination will get grounded again fairly quickly.

In the USA, all the charts for the Capricorn Moon cycle emphasize the nation’s cautious and serious outlook as Capricorn/Saturn energies are prominently featured. Concerns revolve around employment and debt (personal to local/state and federal). The New and First Quarter Moon charts reflect economic instability, and concerns about credit issues. The financial fallout from the Bernard Madoff scandal continues to spread, and another unrelated scandal could unfold at a prominent foreign bank. Traders are likely to be engaging in another wave of spreading rumors about banks and what the Treasury is going to do. (When Venus last conjoined Neptune on 3/6/08, the Treasury had to squash rumors that the government would fully guarantee Fannie (FNM) and Freddie (FRE) debt.) Treasury Secretary Paulson is back at the Capitol for TARP II, as the Capricorn New Moon’s energies relate back to the September 29, 2008 Libra New Moon when the House originally voted against the TARP. Covert activities by the government at home and abroad could get brought out in the open at the First Quarter Moon.

The Full Moon and Last Quarter Moon charts shift the emphasis towards action to modify home mortgages and economic policies to help working families. The stock market could turn more positive during this half of the cycle, but with Mercury retrograde from January 11 to February 1, the trend is temporary. It should come as no surprise that these two Moon periods in the cycle particularly reflect the nation’s high expectations and excitement over President-Elect Obama’s inauguration.

All of the charts increase the potential for property damage from severe weather conditions and/or manmade disasters. “Hotspots” in the US and the world consistent throughout the cycle are: Eastern seaboard (Maine, Florida), Russia, Africa, Afghanistan, Pakistan and surrounding countries ending in “stan”, and India.

We’ve reached half-time in the lunar cycle at the Full Moon on January 10 at 10:27 PM EST. If you want to announce or promote something to receive maximum attention, this is the time to do it! Emotions run high like the tides which will be higher than normal as like last month the Moon is perigee (at its closest point to Earth this year). The Full Moon in its home sign Cancer puts the focus on food, shelter, and what makes us feel emotionally safe and secure. The Full Moon shines like a spotlight on striking a healthy balance between family and career/professional matters.

The Weekly Forecast has a daily description of planetary influences.

*When a planet appears to be motionless, the energies it represents are more pronounced. Planets do not really move backwards, but appear to from Earth’s vantage point.

**The Sun and Moon are luminaries, not planets.