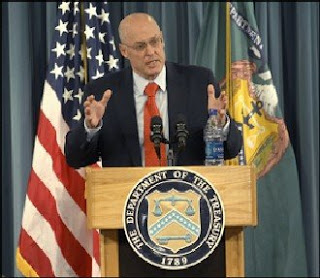 Treasury Secretary Paulson admitted in a news conference this morning that the $700 billion Troubled Assets Relief Program (TARP) will not be used for its original purpose. Instead of buying mortgages and other distressed assets from financial institutions, the Treasury will continue to make direct “investments” into banks and other companies. Paulson announced he is developing a new plan with the Federal Reserve where the Fed would lend to “investors” to buy securities backed by credit cards, auto loans and student loans.

The fact that Paulson has abandoned the original purpose of the TARP is not surprising since the bill was debated in Congress and signed by President Bush when Mercury, the planetary energy of communication, was retrograde. New agreements and projects begun during Mercury retrograde have a tendency not to turn out as intended. It’s fitting that Paulson chose to admit the government would not be buying toxic assets on the day Venus (financial values) conjoined Pluto (toxic debt) in Sagittarius. The Full Moon in Venus-ruled Taurus, the sign of banking, opposed by the Sun and Mars in Pluto-ruled Scorpio, and challenged by Neptune in Aquarius, indicates Paulson purposefully deceived Congress during the initial hearings on the TARP legislation.

Reflecting his Sun and Mercury in fast-acting Aries, Paulson said today he abandoned the plan to purchase distressed assets because it could not get up and running quickly enough. As a cardinal (action-oriented) sign, Aries likes to initiate new ideas and plans, but usually lacks the determination and perseverance to see a project through to completion. This fire energy is more exaggerated as Paulson does not have any natal planets in the grounded and commonsense earth element. And it is the earth signs (Taurus, Virgo, and Capricorn) that most strongly relate to financial and material matters.

With $60 billion left out of the initial $350 billion authorized by Congress to start the program, Paulson said he may save the money for an emergency situation. He’s also considering a new plan to begin after he’s finished the capital injection plan that would require companies receiving government money to raise a matching amount of private capital. Paulson is not in favor of a mortgage modification plan proposed by FDIC chairwoman Sheila Bair because he views it as the Treasury “spending money” rather than bank capital injections which he considers “an investment.” He is against using any of his money to bailout Detroit automakers.

Paulson believes that the only way to spur consumer lending such as credit cards, auto loans, and student loans, is to stimulate demand for securitizations of these products. Paulson didn’t explain who the “investors” for these products would be, but these investors would be borrowing from the Fed. The insanity of this is that securitizations of all types of loans (mortgages, leveraged debt, consumer debt) is what led to lax lending standards in the first place! The energies of Pluto in Capricorn are moving the world toward a simpler banking and lending system, yet Paulson is trying to recreate the past. It would be far simpler for the Federal Reserve to continue buying bank commercial paper with the stipulation that the proceeds be used to fund consumer lending. This way the risk and associated more vigilant lending standards remain at the financial institutions issuing consumer credit.