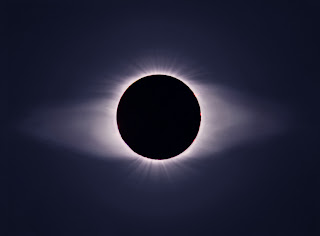 The first of two New Moons in the same calendar month, the Leo New Moon is a Total Solar Eclipse that occurs on August 1 at 6:13 AM EDT. Leo is ruled by the Sun, our life force. The Sun and Leo rule entertainment, sports, and recreational activities – things we most actively engage in during “the lazy, hazy days of summer” in the northern hemisphere. Just as the Sun is the center of our solar system, the energy of Leo and the Sun thrive on being the center of attention. Leo rules matters of the heart and the physical heart. Leo is symbolized by the lion, the “king” of the jungle. Royalty, world leaders, and people in leadership positions are represented by this energy.

With Mercury, the planetary energy of communication conjoining the Leo New Moon, everybody’s talking about themselves and what they’re doing. Don’t be a cowardly lion to express who you really are; have the courage to speak and act from your heart!

The Solar Eclipse is essentially a supercharged New Moon and a harbinger of major change. Events that occur this month will be influential over the next six months. The atmosphere is highly changeable (especially between August 1 and 16), so it’s best to launch major endeavors after the Virgo New Moon on August 30. The eclipse is not visible from the US as its path runs through northern Canada, Greenland, Siberia, Mongolia, and China. The ancients believed areas in the eclipse path would be adversely affected, as the Moon is blocking the life force of the Sun. They also believed that an eclipse in Leo could be detrimental to leaders. Leo rules speculation and the stock market, as well as gold.

In the USA, the public is concerned with their personal interests and needs. Matters relating to financial and physical security dominate. Congress is busy working on economic and transportation related issues. Debt and the interest rates consumers pay continues to rise. Key alliances/partnerships breakdown and dissolve. Secrets from the executive branch could be made public. The President could say things he shouldn’t, and the Vice President could face a legal issue. Health issues might also be a concern for him now. Mars in Virgo opposes Uranus in Pisces on August 6, possibly creating some surprising and explosive situations. There is a higher potential for earthquakes, tornadoes, and severe storms. Stay calm and conscious of what’s going on.

The eclipse challenges Senator Obama’s natal Neptune in Scorpio, and Mercury in Leo conjoins his natal Sun in Leo. What he says and does now can either greatly enhance or detract from his image. Senator Obama is also affected by the lunar eclipse. He needs to guard against acting rashly, and be cautious concerning his personal safety. Mercury conjoins Senator McCain’s natal Mars in Leo and challenges natal Uranus in Taurus. He needs to keep his temper in check, otherwise it will detract from his campaign and possibly his health.

The First Quarter Moon occurs on August 8 at 4:20 PM EDT. The Moon in Scorpio challenges the Sun in Leo and Neptune in Aquarius. People tend to be emotionally intense over concerns about finances and debt.

The Beijing Olympics begin at 8:08 PM local time. With Neptune in Aquarius ruling the chart for the event, air pollution and a hot humid fog will affect the athletes’ performance. Communication/broadcast transmission glitches are likely. Protests against the government are likely to erupt in violence. The games are more likely to hurt than help the Chinese economy.