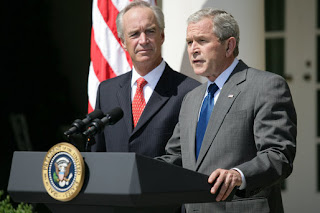 “I know the Democratic leaders have opposed some of these policies in the past. Now that their opposition has helped drive gas prices to record levels, I ask them to reconsider their positions. If congressional leaders leave for the 4th of July recess without taking action, they will need to explain why $4-a-gallon gasoline is not enough incentive for them to act. And Americans will rightly ask how high oil -- how high gas prices have to rise before the Democratic-controlled Congress will do something about it.” – President Bush

President Bush gave a brief speech at the White House this morning to outline his “short run solutions” to help alleviate the cost of crude oil.

1. Lift the ban on exploration in the Outer Continental Shelf (OCS) to yield about 18 billion barrels, enough for 10 years supply. When Congress lifts the ban, Bush said he will lift the executive prohibition (that was signed by his father).

2. Lift the provision blocking oil shale leasing on federal lands such as the Green River Basin of Colorado, Utah, and Wyoming. The shale is estimated to yield about 800 billion barrels - three times larger than the proven reserves in Saudi Arabia. The President said that extracting oil here is more expensive than traditional production, but less than the current market price for crude.

3. Permit exploration in the Arctic National Wildlife Refuge (ANWR). The President emphasized that current technology allows drilling with minimal environmental impact. Bush made a point to emphasize that “my predecessor (Clinton) vetoed” a bill that would have allowed drilling on an area less than 2,000 acres.

4. Bush emphasized the US imports millions of barrels of refined gasoline because the nation’s refinery capacity hasn’t been expanded or upgraded for nearly 30 years. The President wants to expedite the refinery permitting process and shorten the time to no more than 60 days to contest permit approvals.

Bush admitted that “the proposals I’ve outlined will take years to have full impact.” After asking Democrats to approve his plans, the President concluded his speech by blaming high gas prices on Democrats. This was the man who campaigned in 2000 that he was “a uniter, not a divider.”

It’s not surprising with the Full Moon in Sagittarius conjoining Pluto today that the President would choose to lash out at those he considers to be his political enemies. With the Sun and Venus opposing Pluto now, Bush is not interested in looking at the energy crisis as a bipartisan issue requiring bipartisan solutions. Yet Bush and Vice President Cheney have consistently blocked any meaningful efforts during their administration to increase fuel efficiency and conserve energy.

With Mercury retrograde, he repeated his “addiction to oil” phrase from his 2006 State of the Union speech, and his effort to repeal congressional legislation. Mars (anger) is opposing Neptune (addictions, oil) now, and Bush is trying to tap into the public’s frustration over high fuel prices to convince the public the Democrats got us into this mess.

The irony is that when we faced similar circumstances the last time Saturn was in Virgo, a Democratic president told Americans they needed to do their part and conserve energy usage. President Carter lost the 1980 election, showing both parties that asking Americans to make any kind of sacrifice amounted to political suicide.

Both political parties were against using the $168 billion stimulus package toward shoring up the nation’s infrastructure on the grounds that it would take too long to have a meaningful economic impact. Yet it would probably take five to ten years to see a drop of oil from the President’s proposals. In an election year it’s all about instant gratification - and laying the blame for all the world’s ills on the other party.

Pluto forces us to deal with all the things we’d rather keep buried under the surface. Pluto’s cycle of decay, death, and transformation usually makes us better off in the long run, but the journey is a difficult one. The planetary energy of Pluto is so intense and powerful that it’s easier to try to suppress it. This is symbolically why the International Astronomical Union “demoted” Pluto to a “dwarf planet” in 2006, and last week classified it as a “plutoid”. Elevating Neptune to the last planet in our solar system represents how much easier it is to relate to the energies of denial, escapism, and propaganda.

Pluto retrograded* back into Sagittarius last week, and will conclude its cycle in this sign that began in 1995 on November 26, 2008. In its highest form, Sagittarius is about seeking our truth and the courage to live our truth. We cannot blame others who have different cultural, political, or religious ideologies for causing our current situation. The truth is that all of us have played a role. It’s time to demand more of ourselves as well as the people we elect to represent us.

*Planets do not really move backward but appear to from Earth’s vantage point.

Check out this Interactive US Energy Footprint Chart, an interactive United States Energy Consumption Footprint chart, illustrating Greenest States and more. This site has all sorts of stats on individual State energy consumptions, demographics and State energy offices - drill down to your local city.