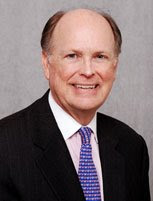 Philadelphia Federal Reserve President Charles Plosser was interviewed on CNBC’s Squawk Box show this morning, providing a plethora of comments financial markets would be unwise to ignore. Plosser has been president of the Philadelphia FRB since August 1, 2006. He is an FOMC voting member who has dissented against recent monetary policy actions.

Regarding the more hawkish tone in speeches made by Fed Chairman Bernanke recently, Plosser said: “At the end of the day we have to take actions to back the speeches up.” When asked by CNBC if the “hawkish rhetoric” coming out of the Fed was “coordinated”, Plosser replied that “Bernanke was being very clear.” He added: “Take Bernanke’s and Trichet’s* comments at face value.”

Plosser said the inflation threat to the US economy is “very serious.” He commented that core inflation at 2.5% and headline inflation running at 4%, “is not consistent with price stability. We must take actions to mitigate inflationary pressures. Once expectations break out, it’s too late.”

“Rates are very low by terms one would think of as accommodative,” Plosser said. He added that “monetary policy is about sustained inflation.” When asked about raising rates, Plosser said that “it depends on how we prepare the markets for that.”

Regarding investment banks having the same access to the Fed lending facility as commercial banks, Plosser said he “didn’t know the answer to that.” However, he made it clear that “as we extend the safety net, we create moral hazard and potentially sews seeds down the road” for future problems in financial markets. Regarding the financial markets, Plosser said he is “more encouraged than six weeks ago, but there’s more bumps along the way. We’re not out of the woods yet.” On the economic stimulus, Plosser said he’s “not counting on a substantial impact going forward.”

It shouldn’t come as a surprise that Charles Plosser possesses the missing element that Chairman Bernanke and Vice Chairman Kohn lack. As I pointed out in a post last week about Richmond FRB President Jeffrey Lacker, with Pluto opposing the Federal Reserve’s chart Pluto, it’s Fed vs. Fed, and the momentum of dissent is growing. And Plosser’s natal Uranus in Cancer exactly opposes the Fed’s Sun in Capricorn (which opposes the Fed’s natal Pluto in Cancer). Uranus is the rebel, and Plosser was the co-chair of the Shadow Open Market Committee.

Like former Fed Chairman Paul Volcker, Plosser has the Sun in common sense Virgo. Plosser’s Virgo Sun challenges his natal Uranus. He has an independent, go against the grain kind of personality, and is not afraid to dissent. In the current Weekly Forecast entry for today (June 12), I wrote about the influence of the Sun in Gemini challenging Uranus in Pisces. I have noticed that when planetary alignments occur in the sky there are usually people in the news who have that same planetary aspect in their own chart. Both Gemini and Virgo are ruled by Mercury, the planetary energy of communication. Plosser is the messenger of the Sun/Uranus energy. However, with his natal Mercury in Libra, the sign of balance and fairness, Plosser delivers his message in a way that is polite and respectful to his colleagues at the Fed.

The take away from the Plosser interview is that rates are going up, so this is not the time to be investing in long term maturities.

*ECB president Jean-Claude Trichet indicated last week that the central bank would have to tighten at their meeting next month.

CORRECTION: The following was added to this post on 6/12/08 at 12:19 PM: A reader has informed me of a typo error in Plosser's remarks about investment banks. The quote should read: "as we extend the safety net, we create moral hazard and potentially sow seeds down the road." (Italicized word reflects the correction from my original sews.)