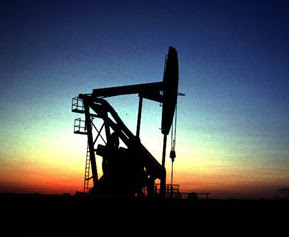 With crude oil up 95% year over year and touching over $120 a barrel yesterday, analysts are turning to satellite images to gauge oil supply.

Today’s Wall Street Journal cites a study by Sanford Bernstein that compared high res sat images from 2001 to 2007 of Saudi Arabia’s Ghawar field. Ghawar is 20 miles wide and 175 miles long, and began production in 1951. It comprises 60% of total Saudi production and around 7% of global supply; the equivalent to all US combined daily production.

In a report issued to clients last month, Bernstein concluded that only part of Ghawar “is suffering signs of old age” and faces “mild production declines at worst.” The northernmost part of the field called Shedgun, showed signs of being “uplifted.” This indicates that heavy water injection is being used to lift the crude to ground level, a method used to maximize fields in heavy decline.

Thanks to Google Earth, anyone can take a peek at peak oil. Satellite O’Er The Desert is a blog that examines the images and according to the WSJ, has concluded that Aramco’s “massive redrilling at Ghawar is part of a ‘constant struggle to maintain the field’s current production level.’”

Interpretations of satellite images have their critics, from investment banker Matthew R. Simmons, author of the book “Twilight in the Desert,” to Nansen Saleri, Aramco’s former head of reservoir management. Saudi Arabia and other OPEC members have never revealed data showing the state of their production holdings.

As I wrote about in “Factors Fueling Oil Prices,” the planetary energies of Uranus in Pisces and Pluto in Capricorn relate to oil becoming increasingly more difficult and expensive to extract. Today’s Journal article cites Mexico’s Cantarell and Kuwait’s Burgan fields have lost their vitality and “need help”. Alaska’s North Slope and the North Sea platform is in “serious decline.” The North Sea and Venezuelan production show “sharp subsidence rates” (surface collapse that could indicate heavy depletion rates underground). Throw in continuing geopolitical tensions in Nigeria, Iraq, and Iran that I see only escalating this summer, and you’ve got continued high crude prices. Moderate relief is possible; not through cutting the gas tax, but by the Federal Reserve raising interest rates to tame inflation.

As analysts now view crude’s next leg up to $140 a barrel, people need to realize that it is not in the Saudis and OPEC’s best interest to have the price of crude at these levels. If they could, they would increase production in an instant to bring the price down to a level that would be palatable enough to curtail a western push to converting to an alternative energy sources. This is why production specs are kept secret. The Arabs have used sovereign wealth funds to make western investments as one method to begin weaning themselves from an oil-based economy.