Phoenix to Rise from the Ashes on Mars 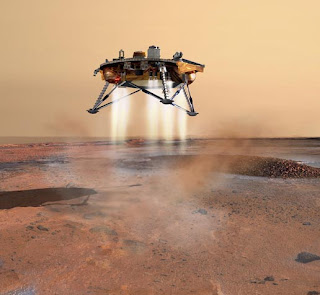 “To get to the ice, you have to go through the fire.” So begins today’s New York Times article about NASA’s Phoenix Lander scheduled to touchdown on Mars Sunday, May 25, 2008.

Symbolically Mars (and its sign Aries), relates to the fire element of action, energy, enthusiasm, and aggression. Mars has ice too. Violent behavior is often referred to as a “cold blooded act”. The $420 million Phoenix mission will touchdown on the Vastitas Borealis, the northern arctic planes of Mars. The 3-legged Lander will remain in its landing spot on a 90 day digging mission to detect for signs that liquid water and other potential conditions that could have sustained life once existed on Mars.

The Times cares enough about symbolism to state in the article that NASA named the Lander “after the mythical bird that rose from its ashes, because the spacecraft is made up of parts from two earlier attempts to explore Mars. The spacecraft has the skeleton and some instruments from the 2001 Mars Surveyor Lander, which remained grounded because of cost overruns, as well as instruments that are based on those aboard the unsuccessful Mars Polar Lander.” Most NASA mission names are derived from mythological and planetary symbolism. The symbolism of the Phoenix relates to the sign Scorpio and its ruler Pluto, the planetary energy of death and transformation. Scorpio was ruled by Mars before Pluto was discovered in 1930. The Times article has a diagram of the recycled parts used from previous missions to power Phoenix, and comments that the Lander has a “’Lazarus mode’ to signal that it has risen from the dead” if it manages to survive the harsh Martian winter.

The Phoenix Lander liftoff occurred on August 4, 2007 at 5:26:34 AM from Cape Canaveral. Mars energies were favorably prominent. Aries rules the top of the chart, and the Moon (emotional atmosphere) was in Aries harmonizing with Pluto in Sagittarius. This aptly describes the recycled materials used in Phoenix. Sagittarius is ruled by Jupiter, the planetary energy of exploration and long distance travel (422 million miles from Earth to Mars). Jupiter energies were prominent as from Earth’s vantage point the planetary energy was stationary*. Mars itself was in Taurus, a sign ruled by Venus – the only real challenging energy in the chart. Perhaps the women on the Phoenix project team disagreed with the men about certain aspects of the Lander mission.

NASA needs the Mars mission to be a success. NASA was created on July 29, 1958 at 4:30 PM EDT when President Eisenhower signed the National Aeronautics and Space Act at the White House. With the Sun (self-identity) in its “home” sign Leo challenging Mars in Taurus and Neptune in Scorpio; these are secret military missions under the cover of scientific study.

The Phoenix Lander is scheduled to touchdown on Mars Sunday about 7:53 PM EDT. Looking at the chart for Washington, DC, Mars in Leo conjoins NASA’s Sun. All attention is focused on NASA now. Saturn in Virgo conjoins NASA’s Mercury and Pluto in Virgo. NASA is probably under a lot of pressure from high level government officials that the agency must get everything with Phoenix and upcoming missions absolutely perfect. The Sun and Venus in Gemini challenge NASA’s Mercury and Pluto in Virgo. This might indicate a conflict between the Phoenix project team (especially the women members) and NASA hierarchy over how and what information is conveyed to the public. With the Moon in futuristic/scientific Aquarius, the public will be interested in the Mars mission.

Certainly NASA’s information should be interesting. Mercury, will be stationary in the sky, about to turn retrograde the following morning. When the planetary energy of communication is stationary, it’s important to pay close attention to information being conveyed. Sometimes people reveal things they’re not supposed to; or information is incorrect and will need to be revised later. Neptune, the planetary energy of hope, idealism, and inspirational vision, will turn retrograde in Aquarius at the same time. This can create a mental atmosphere of confusion and propaganda. It might be difficult now to sort out what is real and what is illusion.

Mercury retrograde in Gemini will conjoin the USA’s natal Mars and challenge the USA natal Neptune in Virgo. Mercury is “at home” in dualistic Gemini. This describes US involvement with the energies of Mars on two fronts: our military actions on Earth, and our military mission to Mars. Expect some intriguing information to surface about both. One of the positive things about Mercury retrograde is things that failed in the past can be successful now. I’m sure the Phoenix Mars Lander project team hope third time’s the charm.

*Planets do not really move backwards but appear to from Earth’s vantage point.