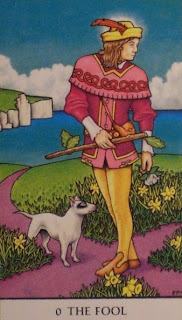 Once again Wall Street was back to using terminology befitting Mars in Cancer: filling up the kitchen sink and piling up the dirty laundry. The market was in rally mode (DOW +391.47/NAS +83.65/S&P +47.48).
Mars (action) has transited Cancer (domesticity) since September 28, 2007. On October 11, 2007, S&P’s Sam Stovall declared Q32007 the “kitchen sink quarter” because “companies are going to claim everything but the kitchen sink,” (referring to writedowns and other one-time charges related to the credit crisis).
After a period of being retrograde, Mars is approaching the same point it left off on November 15, 2007. With the Sun in Aries, a sign ruled by Mars, the market enthusiastically thinks it can get this out in the open so it can march onward and upward. Wall Street was overjoyed that UBS was taking a $19 billion writedown and will raise $15 billion in new capital. Lehman (LEH) joined the party, raising $4 billion from selling convertible preferred shares. As The Wall Street Journal’s Marketbeat column points out:
"Once again, a big writedown led to a big rally. At some point, investors will learn the simple lesson that losses are bad things for companies.”
With Pluto in Capricorn stationary retrograde now, yesterday’s market sentiment was that this time all the bad debt had finally been revealed. The Moon in Aquarius yesterday reflected the extreme emotional sentiment. (Aquarius is ruled by Uranus which can indicate sharp price movements in either direction.)
Some market commentators mentioned seasonality as a factor, with new money flowing into the market from tax refunds and retirement contributions. However, the biggest cause of yesterday’s rally was due to short covering. My favorite permabear, hedge fund manager Doug Kass of Seabreeze Partners, issued his April Fool’s short capitulation.
As Marketbeat observes, “the short bursts of buying have done little for financial stocks in the longer run,” as the major financials are still trading far below the levels at the beginning of the “kitchen sink quarter.” A volatile to down trending market will always feature short term rallies.