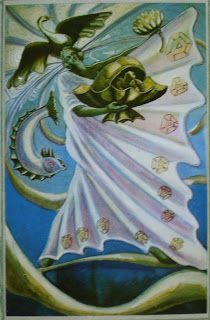 Each New Moon cycle is a time of new beginnings when we get to make a fresh start in the matters that rule the sign the New Moon is in.
The Pisces New Moon occurs on March 7 at 12:14 PM EST. As the last sign of the zodiac, Pisces is a compilation of energies of the eleven zodiacal signs that have come before it. The Pisces New Moon is the time to bring the inner world (dreams, intuition, inspirations), into the outer world. It’s time to pay attention to the signs and symbols, as everything in life has meaning. This is the time to clean up and detoxify to make way for Spring – the Vernal Equinox of March 20.*
The Sun and Moon are aligned with Uranus, the great awakener. There may be many shocks, surprises and disruptions over the next month, as the message of Uranus in Pisces is to break free of addictions and illusions. The axiom, “what you resist, persists” is apt now. Saturn in Virgo since last September is showing us what is not working in our lives. Uranus wants to dissolve what is not working to make way for the changes that are difficult, but ultimately necessary. Gandhi said, “Be the change you wish to see.” It is up to each one of us to first make the changes we subconsciously know we need to make, instead of fantasizing about a political or savior-type figure doing it for us. The opposition of Mars in Cancer to Pluto in Capricorn is forcefully destroying what is no longer working in the world. This aspect emphasizes secrets/spying, deep seated power issues, and nuclear and other weapons of mass destruction. The Mars/Pluto influence will particularly be felt around March 20-21and 30, as well as April 2-3.
Uranus rules Aquarius. Mercury, Venus, and Neptune in Aquarius help by sending messages through dreams, and uplifting books and movies. Connecting with other like-minded people and groups can be particularly beneficial now. Taking short breaks for quiet reflection to just “be” can be far more productive than trying to “do.”** Neptune rules the sea. Immersing yourself in the nurturing element of water is also inspiring, and soothes the nervous system.
In the USA, the focus is on the Bush administration and the USA’s reputation in the world. The Administration is likely to change their stance on certain issues. Sovreign wealth funds (foreign government investment) is likely to be promoted as the answer to solving the financial crisis. Economic conditions continue to fluctuate under ever tighter credit conditions. The stock market will be very volatile and continue downward. Rumors will increase in an effort to prop the market back up, but the Street will continue to sell into strength. The military will be moving troops and spy equipment, expanding the U.S. presence abroad. This may be the direct result of an attack here or at a foreign U.S. base. The military’s presence may be needed to combat a possible disease outbreak at a hospital or prison, or a toxic accident at a lab or nuclear facility. The public is angry over hyperinflation and tight/higher borrowing costs. Congress wants more stimulus spending, particularly for “working people.” A member(s) of Congress could be targeted by a citizen upset by their financial circumstances.
USA Hotspots: The entire Eastern seaboard is affected by the New Moon/Uranus alignment, resulting in adverse and freaky weather conditions (flooding, snow/ice, to earthquakes and twisters), particularly the northeast (NY, NJ, PA, DE). This will result in many transportation cancellations/disruptions and accidents. The DC Beltway corridor (MD, VA) may face a terrorist threat/incident, or need for evacuation/government shutdown, in addition to bad weather. Other areas particularly affected are NC/VA border, and SC/GA border areas. Also: Milwaukee area, Illinois/Indiana, western parts of KY, TN, AL. Wet conditions possible for Dakotas, NE, OK, KS, central TX (San Antonio).
World Hotspots: Bahamas, Cuba, Haiti/D.R., COLOMBIA, ECUADOR, VENEZUELA, PERU, central-western Brazil. Southwestern Norway, Germany, Switzerland, northern Italy (Milan), former eastern Soviet satellite countries, western Turkey. Iraq, Saudi Arabia. Africa (primarily western – central nations): EGPYT, LIBYA, Niger, Nigeria, SOUTH AFRICA. INDIA/SRI LANKA (flooding/crop damage?). Central China (similar to last month’s storms and disruptions), Burma, Japan. Southeast Asia (especially Indonesia), and within a circle radius of Hanoi, Kuala Lumpur, Jakarta, and Manila, may face a major earthquake or tsunami.
Keep in mind that the New Moon is the most important chart of the lunar cycle as its energies influence the entire month. Part II of the Pisces New Moon cycle will focus on the period from the First Quarter Moon of March 14 until the cycle’s conclusion on April 4.
*The Vernal Equinox chart of March 20 will be analyzed in a separate post.
** The New York Times: “I Need a Virtual Break. No, Really” by Mark Bittman (“the minimalist chef”).