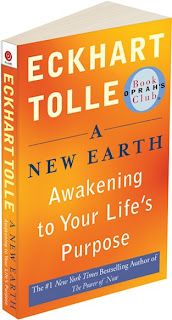 I have always admired Oprah Winfrey, primarily for her business success that is the direct result of her powerful charismatic personality. I share Oprah’s love of books and spirituality. Last night, Oprah began a webinar (online seminar) for Eckhart Tolle’s book, “A New Earth: Awakening to Your Life's Purpose.” For the next ten weeks for 90 minutes beginning at 9:00 PM (Eastern Time), Oprah and Eckhart will discuss “A New Earth” with the web audience.

The webinar was sponsored by Chevrolet (GM), Post-It Flags (MMM), and Skype (EBAY). The companies’ logos appeared around the frame of the video. It reminded me of PBS sponsorship where the companies are announced, and maybe have a very brief commercial, but it’s not annoying. With the Moon Void-of-Course all day yesterday, I was skeptical that even Oprah would not be able to pull off the event without a hitch.

Readers of my Weekly Forecast know that the Moon is our emotional barometer. When the Moon ceases to form any relationships (aspects) to another planet before changing signs, it is said to be Void-of-Course (VOC). Events have a tendency not to go as planned when the Moon is VOC. The stream began interrupting about 17 minutes into the webinar, and within three minutes became unwatchable. In a press release this morning, Harpo Productions said that “more than 500,000 people simultaneously logged on to watch Oprah Winfrey and Eckhart Tolle live, resulting in 242 Gbps of information moving through the Internet.”

Besides having enough power to handle such a large amount of web traffic, it is important to schedule events for the most opportune time. The Moon was VOC in Capricorn, a sign ruled by Saturn. Saturn represents boundaries and limits, constraining Oprah’s computing power in reaching her vast audience. The event may have had a smoother outcome if it had been scheduled for today (March 4) with the Moon in Aquarius. Aquarius is a sign ruled by Uranus, the great awakener. Aquarius/Uranus rules electronics and technology, such as the internet, as well as people connecting as a group. The planetary aspects this week are ideal for understanding and incorporating a shift in consciousness, as Mercury (the message), Venus (values), and Neptune (beliefs), are aligning in progressive Aquarius.

The moment you begin an action creates its overall energy pattern. On March 10, the Moon will be in Taurus, so the webinar should run smoother. The Taurus Moon then will work well with the Chapter 2 discussion on “identification with things.” As an earth sign, Taurus rules the physical senses and earthly form.

Oprah is creating a paradigm shift in two ways. With her Sun, Mercury, and Venus in Aquarius, she is bringing a new message and a new medium of transmitting that message to the masses. Oprah can reach her audience without being constrained by the cable industry. This has the potential to change the whole dynamics of the broadcast industry if content developers are able to reach audiences directly without having to relinquish any advertising revenue to the cable industry. “A New Earth” indeed.

I was thinking the same thing about VOC on the 4th...for all the buildup...and was excited to see you write about it. My question is: would you care to comment on whether you think beginning on a project during a VOC moon has an odd effect on the whole of the project or in this case, just the first class?

Thank you for your question! I wrote in the post that "the moment you begin an action creates its overall energy pattern." So, yes, it does affect the whole project. Looking at the horoscope for the webinar,* Cancer (the Moon) rules the project's reputation. Many participants will probably not return. As this area of the horoscope relates to business, the sponsors (or potential sponsors) may be disapponted. If the event started 1 night later, the Moon in Aquarius would have conjoined Mercury, providing an emotional connection of interactive dialogue between, Oprah, Eckhart, and the audience. Both dates feature a lineup of planets in the fifth house which rules entertainment. Aquarius/Uranus is the ruler, showing that it is a new entertainment medium, that for many is a new (radical) wake up call.
I hope I've answered your question, but if not, please write again. I love to get comments from readers!
*Webinar: March 3, 2008 8:00 PM CST Chicago (Harpo Studios), Illinois.