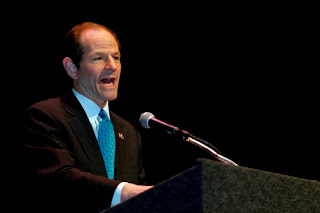 The New York Times reported today that Eliot Spitzer, the Governor of New York, was “Client-9” of an upscale prostitution ring, busted on March 6 by the Federal District Court in Manhattan. The Governor, accompanied by his wife Silda, issued a statement “to briefly address a private matter.” Various media outlets are reporting that he is expected to resign.

The March 7 Pisces New Moon conjoining Uranus (shocks/surprises), challenged Spitzer’s natal Sun in Gemini (self-identity/career). Spitzer was born with the planets of love (Venus) and sexual desire (Mars) conjoined in attention seeking Leo. Spitzer probably enjoys trysting in lavish surroundings, such as the alleged rendezvous with the prostitute at the Mayflower Hotel in D.C. on February 13. Love doesn’t come cheap with this planetary alignment. According to the affidavit, Client- 9 paid $4,300 for an appointment that ended at 12:02 AM on Valentine’s Day. With Venus and Mars challenging Spitzer’s Neptune in Scorpio, no sexual drama could be complete without engaging in something that is considered taboo, such as prostitution. People with Venus/Mars squaring Neptune can have a tendency to engage in clandestine affairs. The February 20 Lunar Eclipse exactly conjoined Spitzer’s Pluto, representing secret sexual activities. With his progressed* Sun in Leo is conjoining his Mars, his ego likely became more driven in engaging in these type of liaisons.

Mercury, the ruler of Spitzer’s Gemini Sun, is also in Gemini. It opposes his Saturn in Capricorn. Before he became governor last year, Spitzer was the New York Attorney General, getting lots of press for attacking the highest analysts and executives on Wall Street. During those years, CNBC would show footage of Spitzer walking down the street with the theme to the TV show “Law and Order” playing in the background. The morning after the tryst, Spitzer told the House Financial Services Committee that a “financial tsunami” would ensue throughout the economy if something wasn’t done to fix the problems of the bond insurers to save their triple-A credit ratings.

The First Quarter Moon on March 14 will highlight Spitzer’s Mercury, likely revealing more details. Mars in Cancer will exactly oppose Spitzer’s Saturn on March 17, indicating that his actions are not outside the boundaries of Law and Order. Transiting Saturn in Virgo will conjoin his natal Pluto on April 19, exposing more secrets and possible criminal charges. The New York Times is reporting that although clients of prostitutes are usually not charged, the 1910 Mann Act prohibits transporting a person across state lines for the purpose of prostitution. (“Kristen” was alleged to have traveled from New York to D.C. for the tryst.)

Eliot Spitzer is yet another example of a leader engaging in hypocritical behavior. Several people on Wall Street are likely celebrating tonight.
*A mathematical method of prediction that calculates the birth planets forward in time.
Eliot Spitzer: June 10, 1959 time unknown Bronx, New York