Shooting Down the Satellite 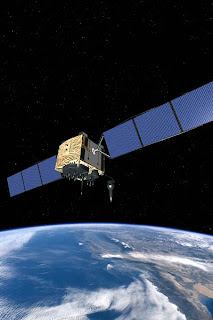 The Defense Department publicly announced on February 14 that the Navy will shoot down a damaged spy satellite expected to crash to Earth on or before March 5. The school-bus size satellite contains 1,000 pounds of hydrazine fuel, which the Bush Administration says would be hazardous to humans if dispersed over a populated area.

NROL-21 was the first satellite launched by the United Launch Alliance, a partnership between Boeing’s (BA) Delta and Lockheed Martin’s (LMT) Atlas rockets, for the National Reconnaissance Office. The satellite was launched on a Delta II rocket on December 14, 2006 at 1:00 PM PST from Vandenberg Air Force Base in California. The chart is ruled by Mars which conjoins Mercury and Jupiter in the eighth house of secrets, spying, and toxic waste. Mercury and Mars challenged Uranus (shocks/surprises) at the launch, which explains why the satellite immediately malfunctioned. Ironically, the Administration optimistically believes (Jupiter) that it can solve the problem by harnessing the same energies that caused the problem: by shooting (Mars) the satellite down over the ocean (Uranus in Pisces, which rules the sea). The order was given to the Pentagon on January 4, when the Moon was in Sagittarius and conjoining the launch chart’s Mercury, Mars, and Jupiter.

The Navy has modified three SM-3 medium range missiles aboard the Aegis destroyer USS Lake Erie. Accompanied by the USS Decatur and USS Russell, the Erie will fire the missile from somewhere in the northern hemisphere of the Pacific Ocean. The window of opportunity will begin soon after Space Shuttle Atlantis has landed (scheduled for February 20 at 9:06 AM EST). If the Navy misses, they will wait a couple days and try again. I think the most likely dates the single and/or follow-up attempts will occur are February 24, 28, and March 2.

The Administration has ordered FEMA, the agency that put Hurricane Katrina victims in toxic trailers, to have six rescue teams at the ready across the country in the event the toxic fuel disperses into the atmosphere. Mars is in Gemini until March 4; it can physically represent the affect of burning lung tissue caused by breathing in hydrazine-laced air. This can also represent the Navy taking more than one shot at the satellite. Mars opposing Pluto through mid-March raises the possibility of toxic fallout.

Eclipse influences can be felt for several months afterwards. The February 6 solar eclipse and the February 20 lunar eclipse charts for the U.S. emphasize the land and environment. With Mercury (breathing) and Neptune (chemicals) conjoined with the solar eclipse, it does raise the potential of fallout and its effects on the public’s health. Mars is prominent in both charts, which can represent aggressive action by or towards the U.S. Another nation could threaten or use military action if any fallout lands on their territory.

Critics have said that the real reason the Administration wants to shoot the satellite down is to prevent its highly classified contents from reaching enemy hands (Mars opposing Pluto). With such an emphasis on the houses of espionage (eighth and twelfth), as well as the Sun aligned with Pluto in the satellite launch chart, this is a valid point. My question to the government and the defense contractors is why use such toxic material when there’s always the possibility that a satellite will fail and crash into an inhabited area?

Hopefully the satellite ends its life similar to Skylab one Saturn cycle ago when Mars was also in Gemini, with zero to minimal adverse impact.

My primary source for information regarding the satellite shootdown plan was Department of Defense news briefings. Other sources used were various reports released since February 14 by the Associated Press and CNN.
Posted 2/17/2008 09:13:00 AM