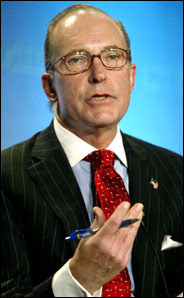 There are many indicators that all point to inflation spiraling out of control: food, energy, medical, commodity prices, and a falling dollar. But you know inflation is really a problem in America when free market capitalist Larry Kudlow is “concerned.”
Larry Kudlow is the host of CNBC’s Kudlow & Company, a show described by the host as “money, politics, stocks – that’s our beat.”
With his Sun in Leo (the stock market), conjoined with Mercury (communication) and Venus (finances), Larry Kudlow always sees the sunny side of the financial markets. Like Federal Reserve Chairman Bernanke and Vice Chairman Kohn, Kudlow lacks the earth element* in his planetary lineup. The ultimate Permabull, he views financial conditions with “the glass half full.” This reflects his Mercury/Venus squaring Jupiter, the planet of growth, expansion, and optimism.
I am an occasional watcher of Kudlow & Company. I disagree with most of his political views, and his incessant “free market” shtick gets pretty grating. However, Kudlow is not the typical conservative pundit that has no real knowledge or experience about the economy. Kudlow was an economic advisor to President Reagan, and the chief economist at Bear Stearns (BSC). He began his career as a staff economist in the open market operations division of the Federal Reserve Bank of New York.
So for Larry Kudlow to declare on his February 26, 2008 show that “I don’t know what the Fed is watching” (meaning inflation indicators), and that he is “concerned about inflation” – is a BIG deal. Just to confirm I wasn’t imaging things, I tuned into his show the following evening. Once again, Kudlow expressed his frustration with the Fed. I recommend readers check out a post from Kudlow’s blog titled, “Is the Fed in Denial About Inflation?”
Larry Kudlow may not be “Right (correct) on America”, but he’s certainly Right on Inflation.
Larry Kudlow: August 20, 1947 time unknown Englewood, NJ
Related Posts from Wall Street Weather: *“The Missing Element”, “The Fed’s Future”, “Inflationization”, “Wheat Goes Wild”
Posted 2/28/2008 10:23:00 AM