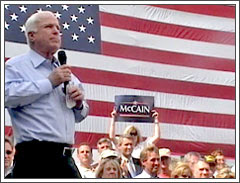 Last night’s Super Tuesday primaries have elevated John McCain to front runner status for the Republican Party’s presidential nomination. Despite an ever growing number of Americans wanting to end the war in Iraq, McCain openly advocates keeping U.S. troops there for at least the next one hundred years.
So why has McCain soared to the top of the Republican race? The answers may be found in looking at his chart and how it aligns with the USA.*
John McCain was born on August 29, 1936 in CocoSolo Panama at 9:00 AM, according to Mama McCain. McCain’s Sun is in Virgo and harmonizes with Uranus in Taurus. Virgo relates to service, such as serving in the armed forces. McCain has the Sun in the eleventh house of his horoscope. McCain peppers his speeches with “my friends”, which is one of the areas of life the eleventh house rules. As the natural planetary ruler of the eleventh house, Uranus represents acting independently. Supporters admire McCain for crossing party lines on many issues over the years. The eleventh house represents legislative bodies. Aside from his military service, McCain has spent his entire career in Congress.
McCain’s Mars (military/war) is in Leo, the sign of leadership. Leo rules the Sun, and this ties back to the heart of who John McCain is and his life’s work. McCain’s Mars harmonizes with Jupiter in Sagittarius. Not only does McCain want to win the war in Iraq, but he would probably favor expanding the U.S. military’s presence abroad. Mars energy can become angry and irritable. McCain’s Mars is in conflict with his independent and unpredictable Uranus, resulting in him losing his temper – mostly at fellow Republicans. Supporters are willing to overlook that, admiring his “straight talk” of Mercury in Libra, a sign ruled by Venus.
As the ruler of his horoscope, Venus helps McCain keep his temper under the surface. In debates, McCain will sort of smirk/smile when he disagrees with the views of the other candidates. His skin will turn to a reddish hue and his facial muscles will slightly twitch with annoyance, as he uses all his willpower to keep his temper in check.
Venus is the planet of attraction, and it is McCain’s Venus that exactly aligns with the USA’s Neptune in Virgo. Neptune rules dreams and idealism; it squares the USA’s Mars in Gemini. McCain is idolized by many for his heroism during the Vietnam War.
Venus rules financial matters – clearly not McCain’s strong suit. McCain has admitted in debate after debate that other people would have to do the economic math for him if he is wins the White House. When asked during a CNBC debate last October if he thought the Federal Reserve did the right thing by lowering interest rates, McCain said: “I don’t have that kind of expertise to know whether he (Bernanke) has or not. I wish interest rates were 0.”
McCain’s Moon in Capricorn conjoins the USA Pluto (in the second house of the economy), and his Pluto in Cancer opposes it. This further reinforces his core focus on diverting as much as possible of the nation’s budget for national security issues. He would probably have more “black box budgets” than any other President in history, and he would probably make every attempt to further erode civil liberties for the sake of security.
John McCain has said time and time again that “The issue of the twenty-first century is radical Islamic extremists.” That is the politics of yesterday. The planetary trends of the next several years call for peace and rebuilding the world from within our own borders.
*USA: July 4, 1776 5:10 PM Philadelphia, Pennsylvania
Posted 2/06/2008 09:24:00 AM