Horsing Around About Oil 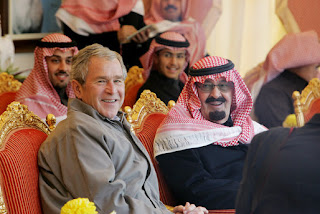 I find it interesting that President Bush always seems so relaxed when hanging out with the Saudi royal family. I’ve never seen the President hold hands or break out dancing with other world leaders except King Abdullah. I guess the President feels you’ve gotta do what you’ve gotta do to suck up to the world’s biggest oil producer.
In an interview on ABC’s World News Tonight yesterday, the President talked about making his case to the Saudis to increase oil production, that high oil prices are crimping the U.S. economy. Of far greater interest was the President’s remark that “If they don’t have much more to put on the market, it’s hard to ask them for more.”* Does the President know something that we don’t – that Saudi Arabia faces peak oil?
Bush’s idea of alternative fuel is ethanol, a corn-based product that uses more energy than oil to produce and yields less mpg. It adds to the cost of food for all Americans, but hey, at least the farmers are helped (think Iowa). The President (and most politicians) would not dare legislate that Detroit bury their SUVs and build more fuel efficient vehicles now, let alone tell the American people that they need to do their part by consuming less energy.
President Bush tells Americans that we must spend more money and troops fighting “the enemies of freedom and democracy” while cozying up to Saudi Arabia, where bin Laden and the majority of the 911 hijackers were from. We must sell $20B of military weapons that include smart bomb technology to them. We must allow them to use their sovereign wealth to bail out the banks and brokerages.
The Bush doctrine comes down to this. Use the talk of spreading freedom and democracy around the world to justify war and aggressive policies. However, repressive regimes that have what America wants are exempt. As a woman, I am particularly outraged at our kissing up to Saudi Arabia – the only nation where a woman cannot drive. Those horses Bush is viewing are treated far better than women in Saudi Arabia.
* I believe I’ve quoted the President pretty accurately. This was an interview Bush gave to ABC’s Terry Moran. I went to ABC’s website, but was unable to find the clip.
Posted 1/16/2008 08:36:00 AM