Pandas are the only thing China should export 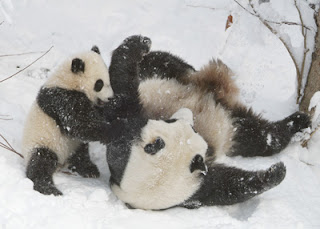 Catching up with Barron’s early this morning, I was amused by an ad saying “Pandas aren’t the only China bears”. I’m crazy for the cuddly creatures and enjoy watching the pandas at D.C.’s National, Atlanta, and San Diego zoos. They never fail to put a smile on my face!
The Barron’s ad is for the ProShares UltraShort FTSE/Xinhua China 25 (FXP), a short ETF “built to gain value as Chinese stock prices fall”. I have no knowledge of this fund, and would strongly advise that anyone interested in this ETF read its prospectus carefully. (The smart investor always reads the prospectus, unlike state and local governments who would rather play the ignorant victim.)
The bottom line here is that China is not immune to a major slowdown in their economy. Planetary cycles are global in nature. Depending on the country’s horoscope, some countries may fare better than others during certain cycles, but will still be affected. China’s chart shows a contraction in its economy has already commenced and will be full-blown between July and September 2008 – just in time for the 8/8/08 Beijing Olympics.
Photo: National Zoo photo of Tai & Mei, 2/12/07.
LINKS:
National Zoo – 2 panda cams of parents Mei Xiang & Tian Tian and their toddler Tai Shan
http://nationalzoo.si.edu/Animals/GiantPandas/
Somesai – takes the best pictures of pandas on the web!
http://www.flickr.com/photos/somesay/
Atlanta Zoo – Cub girl Mei Lan and Mom Lun Lun
http://www.zooatlanta.org/animals_panda_cam.php4
San Diego Zoo – Cub girl Zhen Zhen and Mom Bai Yun
http://www.sandiegozoo.org/zoo/ex_panda_station.html
Posted 12/10/2007 08:48:00 AM