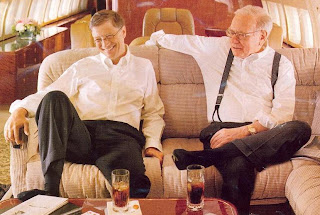 Today Jupiter, the planet of growth and expansion exactly aligns with Pluto, planet of massive power and transformation, in Sagittarius. These two planets conjoin about every thirteen years. (The last time was December 2, 1994 in Pluto’s home sign Scorpio.)
Financially, Jupiter aligned with Pluto represents large sums of wealth held by a small group of powerful and influential individuals – the plutocracy. When a major planetary alignment such as this occurs, there will be people prominent in the news that possess these planetary energies in their birth charts. Warren Buffett was born with Jupiter conjunct Pluto (in Cancer). The second wealthiest man in the world was interviewed by CNBC’s Becky Quick today.
With his Sun in number-crunching practical Virgo, Buffett’s mantra is “You should only buy what you understand.” As the world’s most famous value investor, he told Becky the Federal Reserve’s actions don’t really matter to the long-term investor; “what’s most important is to look at how much you’re getting for your money.” Buffett said that the best investment buys were in 1974 and that companies “are not within a mile as cheap now”.
Buffett was in San Francisco today to fund raise for Hillary Clinton. (He also fund raises for Barak Obama.) The Jupiter/Pluto alignment in the sign Sagittarius represents the desire for massive political change.
Since Jupiter rules politics and Pluto rules death and taxes, there’s been a lot of argument about the estate tax. Last month Buffett appeared before the Senate Banking Committee expressing his long-held opposition to repealing the estate tax. “A progressive and meaningful estate tax is needed to curb the movement of a democracy toward plutocracy”, he said. The richest man in the world and his good friend Bill Gates, was also born with Jupiter conjunct Pluto (in Leo). They were also both born with their Sun (self-identity) conjunct Neptune, the planet ruling charities. Both men are concerned that permanent repeal of the estate tax would greatly diminish charitable giving. Buffett announced last year that the bulk of his estate would go to the world’s largest charity, the Bill & Melinda Gates Foundation.
Related Posts: See Cycles under DIRECTORY.
Warren Buffett: August 30, 1930 time unknown Omaha, NE
Bill Gates: October 28, 1955 10:00 PM Seattle, WA
CNBC Buffett interview videos/transcript:
http://www.cnbc.com/id/22199866
Posted 12/11/2007 08:48:00 PM